Tuesday, 30 October 2012 – After visiting the world’s largest dinosaur pit yesterday, Pan drove me four hours to Qufu, the birth and burial place of Confucius (552 BC – 479 BC), which is also in Shandong Province.

I saw many sights along the way. 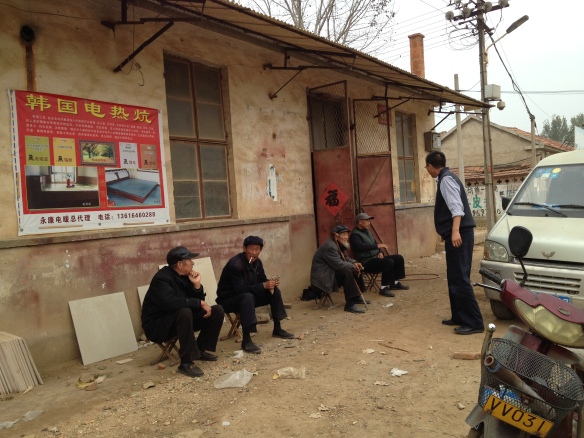 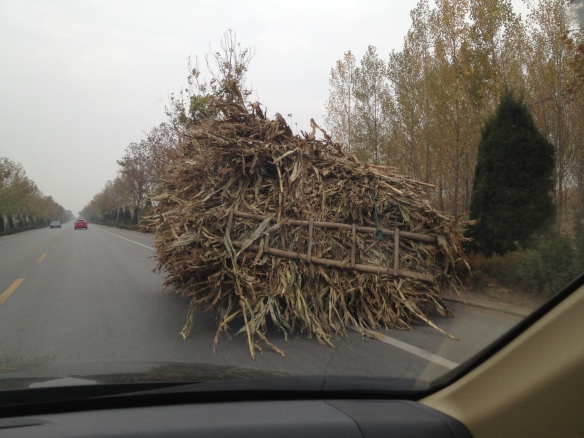 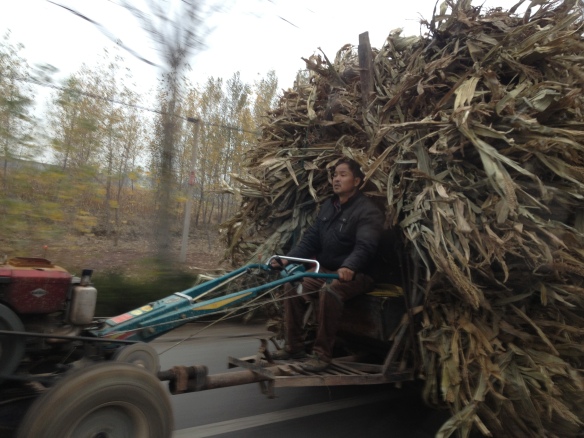 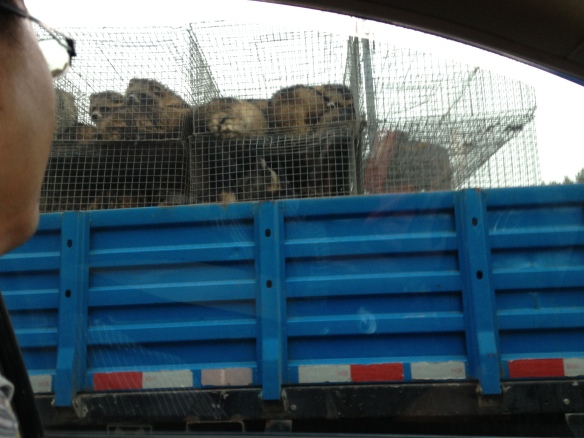 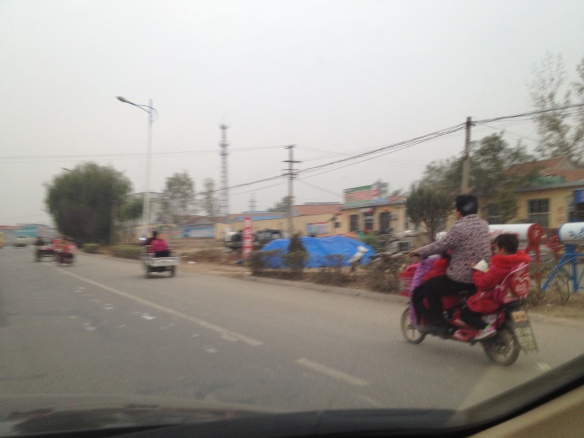 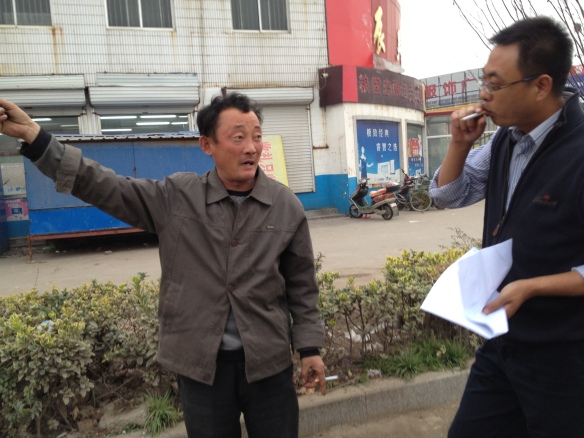 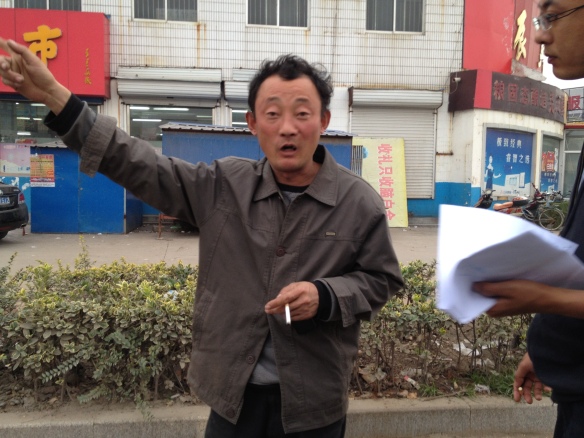 It was dark by the time we got there.

And after a quick dinner, 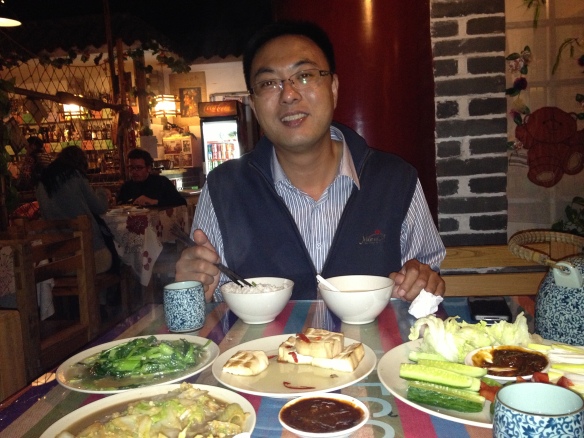 Pan drove all the way back to his home in Qingdao. He had given me an entire day of his life because there was no easy public transportation to the two places I wanted to go in his home province. He had also been worried that we wouldn’t be able to say a word to one another all day because he speaks no English. But everything turned out okay. I repeated my entire Chinese vocabulary, which includes the three words of my name, over and over again and used the same words in different ways so that we had lively conversations all day long! He was truly amazed. And I am so immensely grateful.

Confucius, as everyone knows, is the philosopher who has had the greatest influence on Chinese culture and thought, and on Asian society in general. He taught that leading a moral life was most important. He also said that we must respect our elders, and that the family is the model for government. Very little has been written about Confucius as a child, so I wanted to see Confucius’s home with my own eyes, and set my own two feet upon the stones where he walked.

But first I had a hearty breakfast of banana pancakes. 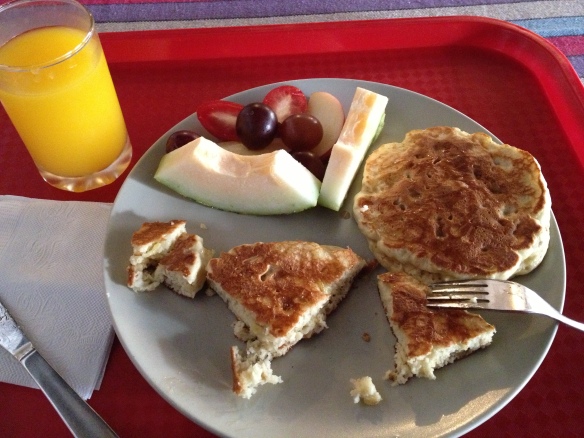 Then I was ready to walk up the street to the Temple of Confucius, which 12 emperors have visited to offer sacrifices to Confucius. 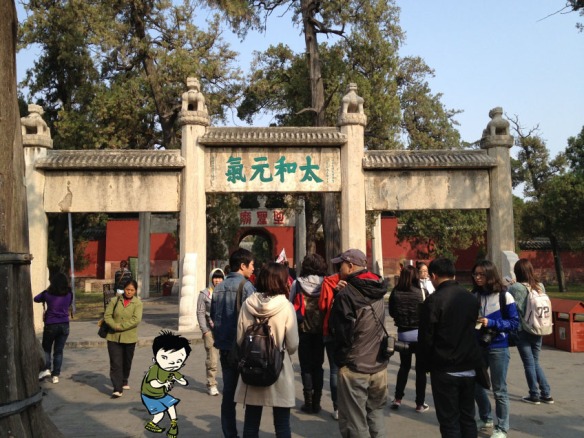 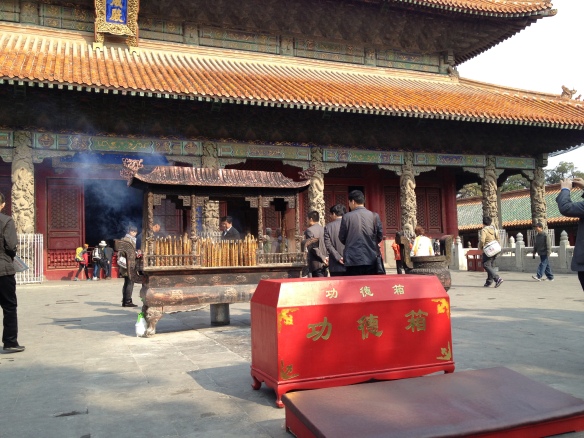 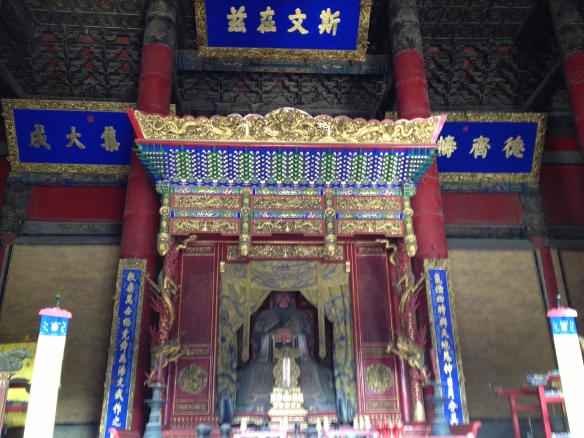 The highlight of the Confucius Temple for me was in a far rear building where the crowds didn’t go. To my great surprise and delight, I found one of the only surviving works of the T’ang Dynasty painter Wu Daozi: 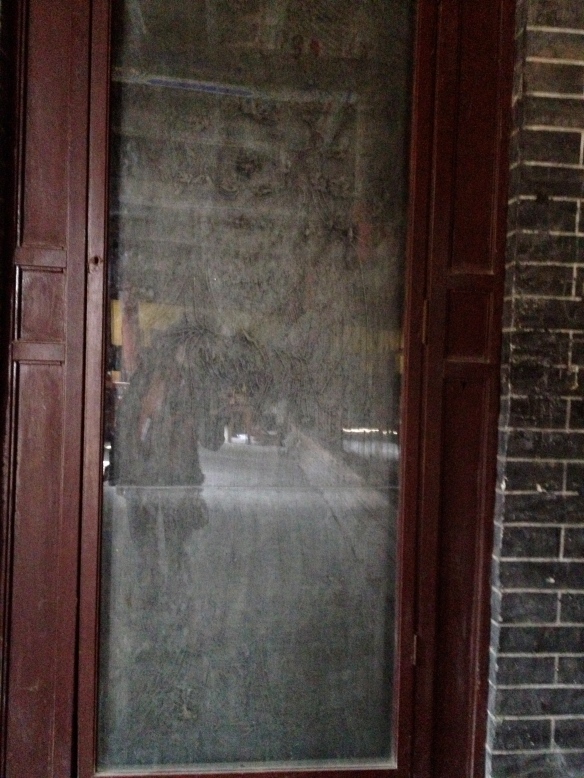 It was behind glass and the reflection made it hard to get a good photograph. But a tourist from Qingdao came along and made sure that I knew I was standing in front of a work by the Amazing Wu Daozi. 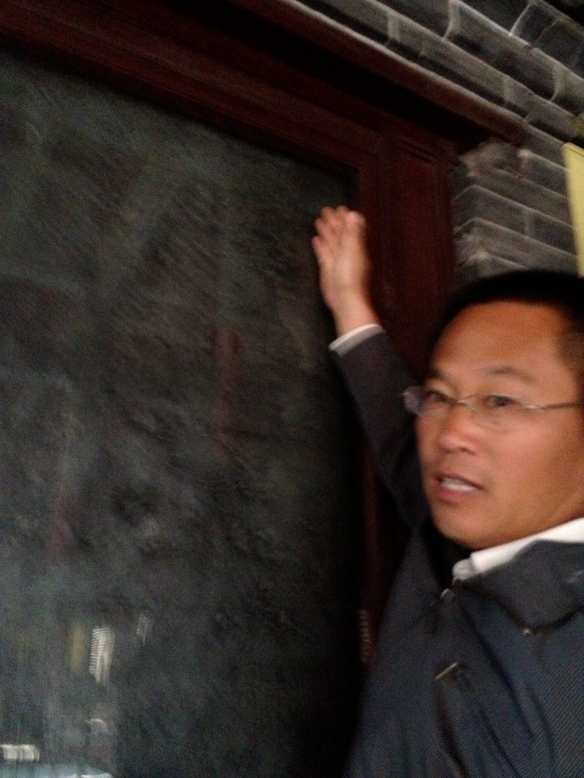 I tried to tell him that I had just finished a picture book about Wu Daozi (BRUSH OF THE GODS, published by Random House 2013), but alas, I’m afraid that I must have said something like “I never learned to read, I’ve never heard of Wu Daozi, please tell me more!” because it sure sounded like he began to tell me all about China’s most famous painter that every child has heard of since the age of four.

Also on the temple grounds was a long series of stone carvings that told the life story of Confucius in a comic strip format (reading from right to left). 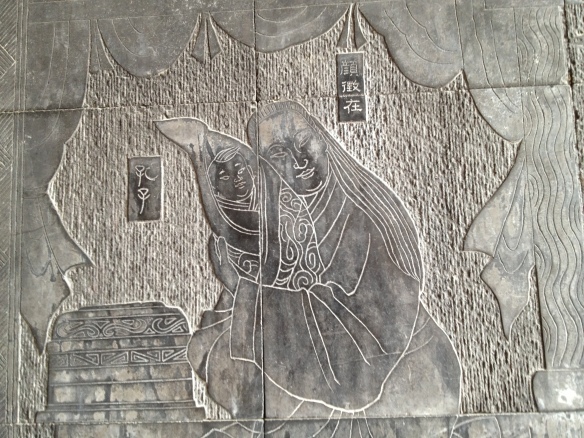 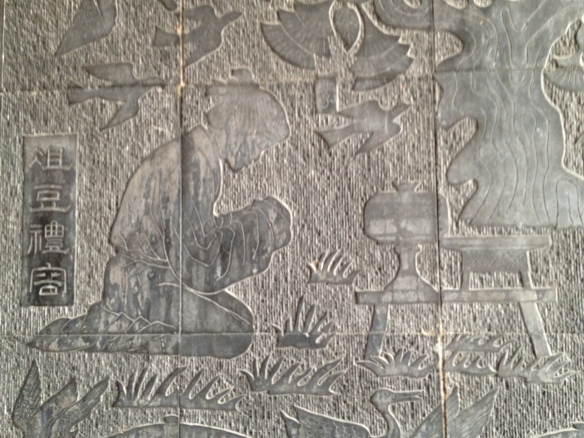 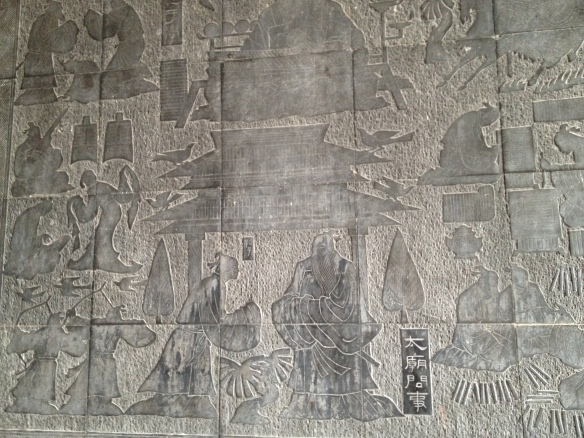 It reminded me of the frescos of Giotto in the Capella degli Scrovegni in Padua, depicting the life of Christ.

After that, I visited Confucius’ Family Mansion next door. 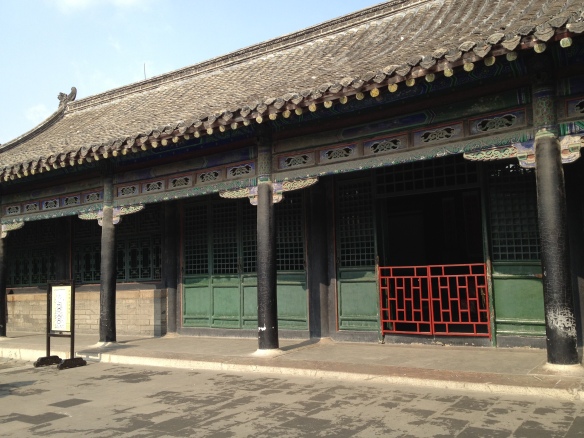 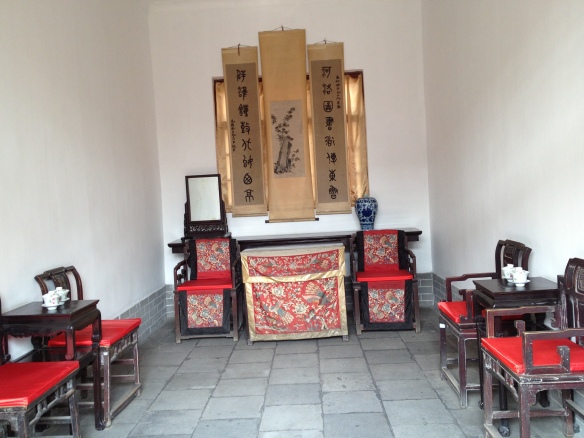 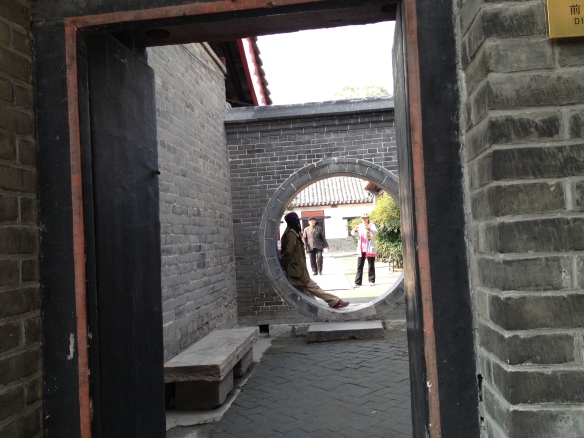 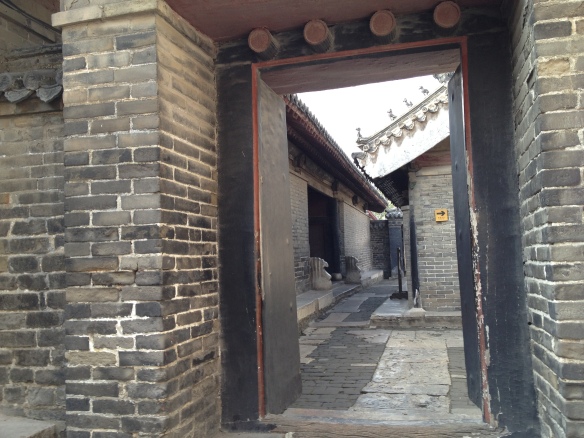 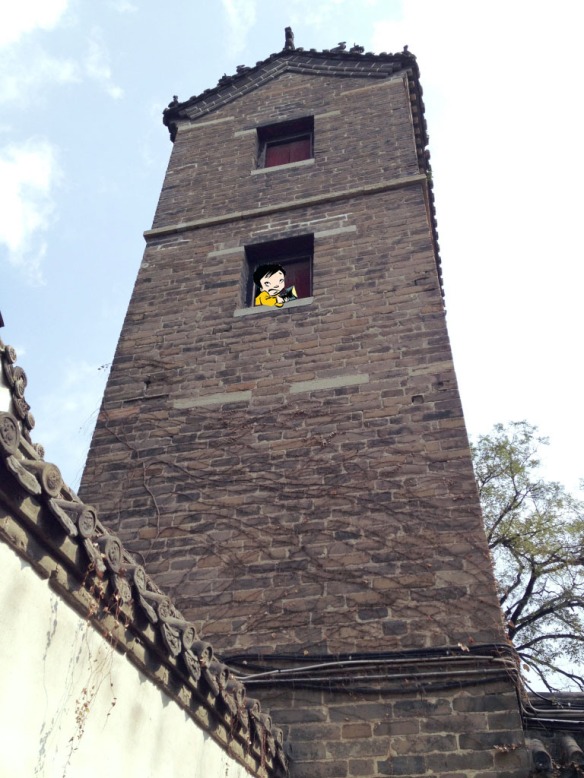 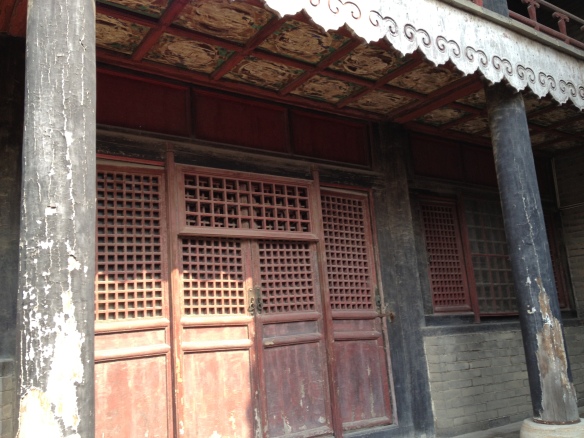 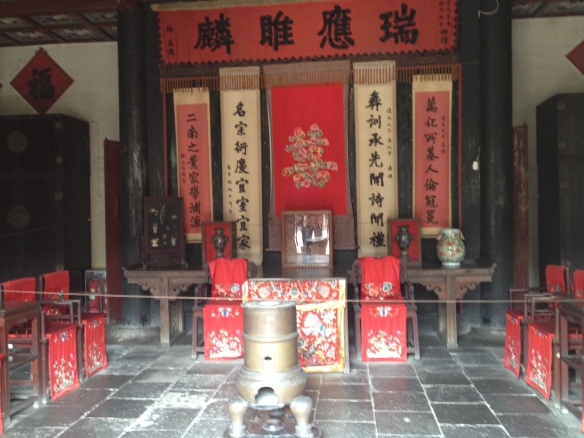 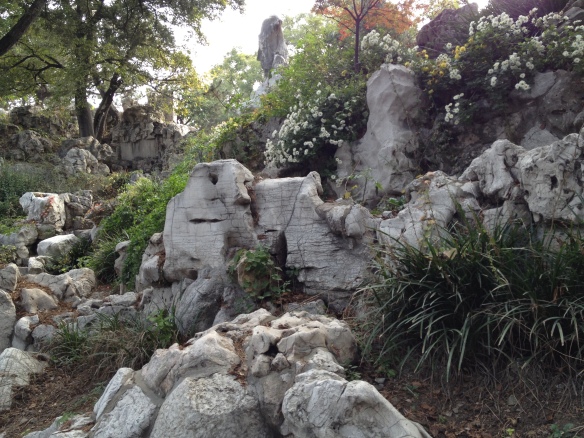 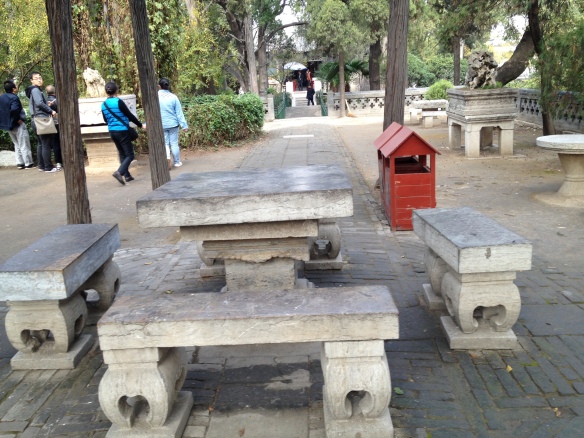 My day in Qufu ended with a delicious bowl of Shandong noodle soup. 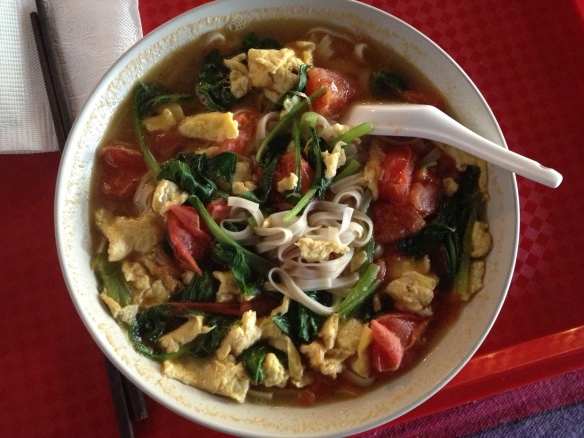 I bet Confucius enjoyed it as a child.

Then off I went to my next adventure.

3 thoughts on “Qufu — Home of Confucius”