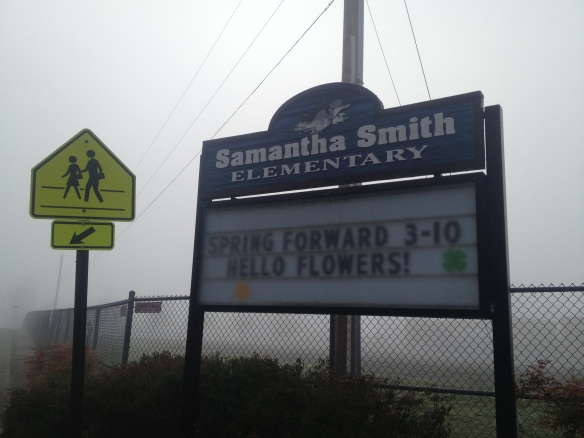 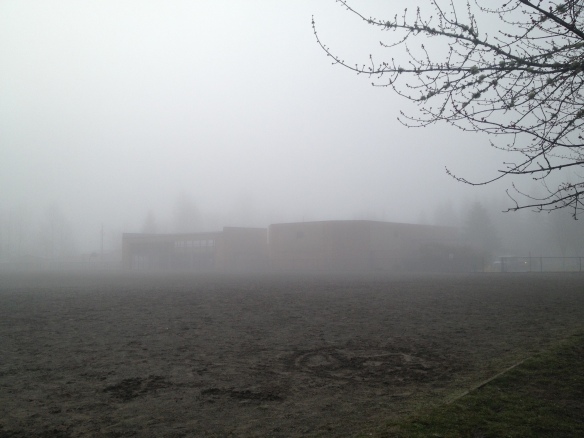 The fog was so thick you could put it on a spoon.

It brought back so many memories of walking to school in the fog in Seattle. I made my host librarian, Barbara Regan, stop the car so that I could get out and take it all in. I breathed in. I filled my body with fog. Suddenly, it was no longer 2013. It was 1973. I had stepped into a time machine. I needed my reflective tape!

There was even a kid who passed me on his bike:

Every kid in the rainforest of the Pacific Northwest has gone to school in the fog. They know to dress brightly and/or wear reflective tape, just in case.

Ruby Lu is one of them. So there were LOTS of Ruby Lu fans here, and in the entrance courtyard I was greeted by the largest Ruby Lu bulletin board I’ve ever seen:

But that was not all. I walked a little further and found this:

Wow! I’d never seen my books as a “magical world” before. It made me think of a theme park. Move over, Walt Disney 😉 !!!

But that was not all. At the entrance to the library I was greeted by wordles of fears: 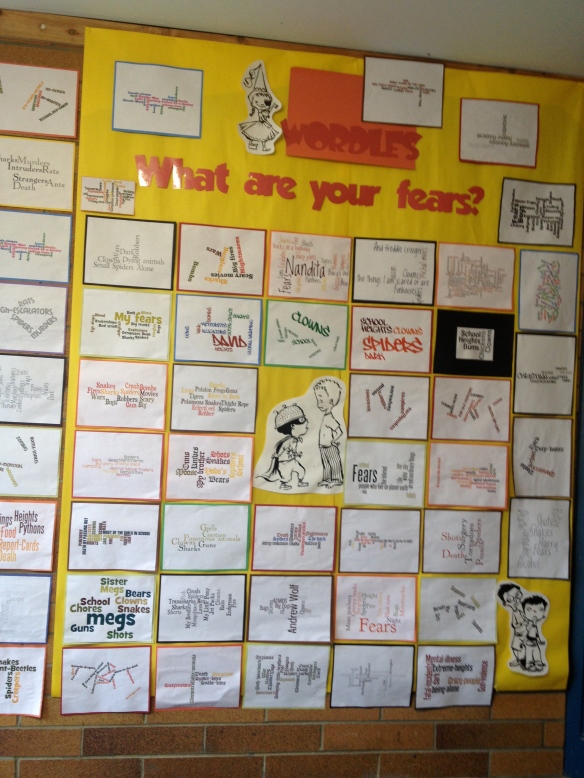 How cool is that? I only wished that I had snapped close-ups of them. Then you would see that Alvin isn’t the only neurotic kid around!

Then inside the library, I was greeted by the pièce de résistance of my all my books thus far:

For those of you who have haven’t read it, my heroine in RUBY LU BRAVE AND TRUE makes herself a genuine driver’s license and drives her little brother four blocks to Chinese school in the family car.

And just as my editor, who had wanted me to delete the scene, predicted would happen, kids here have taken the first roll down that slippery driveway, and made themselves genuine drivers’ licenses: 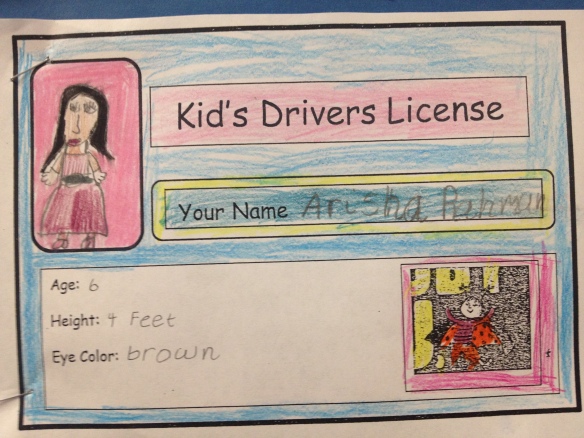 Actually, I would LOVE to live here. The mornings are foggy. The mountains are beautiful. The books are plentiful. And the welcome at Samantha Smith, was the warmest!!! SOOOO many young readers stopped by the library to greet me first thing in the morning before heading to class:

It was totally unplanned and such a nice surprise! The young readers here were very good at conversation. Someone even asked if I was nervous about speaking in front of the large groups at her school. She was very sweet to be concerned :).

I smiled nervously. Through twitching cheeks and clenched teeth, I squeaked, “not really.”

And repeating yourself in public is even worse. It means your other foot is not far behind.

Then repeating yourself in public and blogging about  it — well, I’m pretty sure that my parents, who still have full use of their minds, are convinced that I’ve lost mine.

But when you’re an author, and if you avoid the slippery slope of school visits, you miss out on a lot of things. Such as . . .

A chance to make a connection before nine in the morning (note the clock on the wall):

A chance to repeat yourself after repeating yourself: 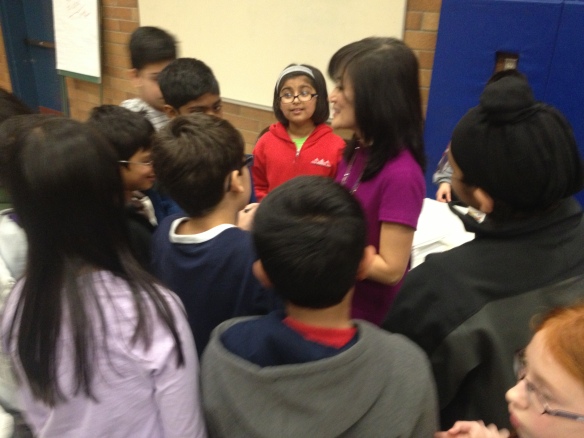 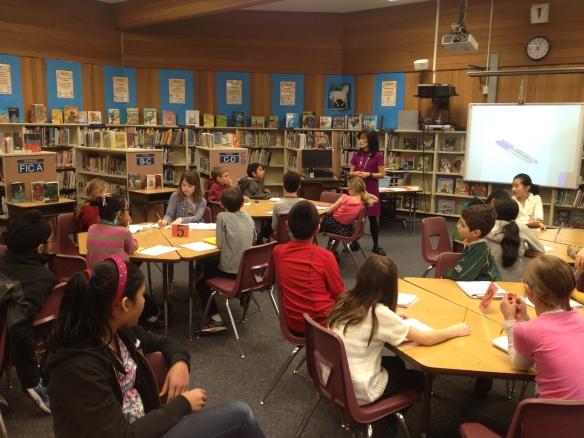 The kindness of a librarian who has never met you:

The generosity of mom volunteers who have given up a part of their busy day to sell your books:

The chance to stand on tip-toe to prove that you’re still taller than the fifth-graders:

The chance to sign a book for a teacher who knows how to challenge your writing skills:

Thank you, Mr. Sweet, for stopping me dead in my tracks. I was on a roll, knocking out autographs like nobody’s business, until I got to your book. Then my hopes of leaving before 4 p.m., EVAPORATED. My brain numbed. My thumbs curled. My Sharpie dried up. Blamed if your inscription warn’t the horriblest dizzy-eyed, muddly-mettled outrage I’ve ever written 🙂 !!!

Seriously, when you have an Author Day like this, you begin to realize how lucky you are. It humbles you. It makes you deeply grateful.

A sqillion thanks to my wonderful host, Barbara Regan, the librarian at Samantha Smith, who worked tirelessly to make this a very special and exciting day for me and for all her young readers. Your enthusiasm is contagious!

Thank you, young readers, for welcoming me with open arms and open hearts.

Thank you, Sally, the kindergarten teacher, who shared her yummy soup with me when I stared at it for too long and showed a salivating interest 🙂 .

Thank you, Sondra, the library aide, for all your help.

Thank you, Mark, the custodian, for setting up the gym several times.

Thank you, Moms, for selling books.

Thank you all for everything.