Is the end of summer leaving you feeling sad and melancholy? Do you wish you could begin summer all over? Do you dread having to wear clothes again and going back to school? Worse, are you worried about that perennial first assignment, “What I Did Last Summer”?

You are not alone.

When you’re an author, and you haven’t written a single word all summer on account of you were taking a break from authoring, you feel this way too.  Now It’s time for me to put my clothes on and go back to work. But first, let me tell you What I Did Last Summer. Maybe it’ll give you some ideas to use in your own essay 😉 —

First I got on a plane.

Nineteen hours later . . . I got off the plane — in a daze — in a place far away, where you can get a coffee massage at the airport.

Don’t want to be massaged with coffee? There was art at the airport too:

Lots of sculptures like the one above, looked you smack in the eye as you headed for the metro:

The Shanghai Metro has 12 lines and 300 stations, and covers 287 miles. It is the second longest metro system in the world.

How I figured out where I was going, I have no idea. Like I said, I was in a sleep-and-calorie-deprived daze. All I know is that I got a ticket and hopped on the next train, where this little girl was tormenting her grandparents to no end:

A little while later, I popped out of the Metro and into the middle of Shanghai: 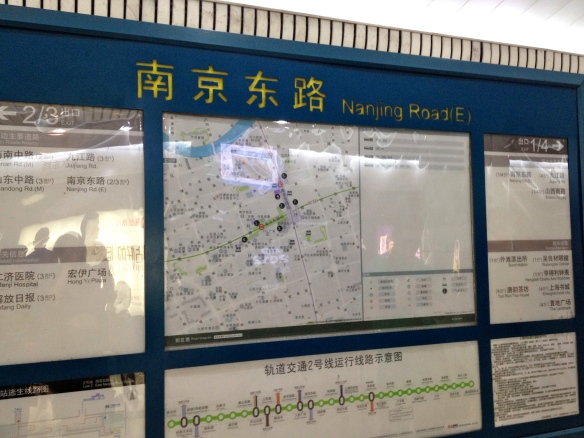 Hey, how did that happen?

I walked down the street and straight into my hotel,

where they were waiting for me at the front door. “Your bags will be waiting for you in your room, Madam.” No problem. I understood that perfectly! This is what it looked like inside: 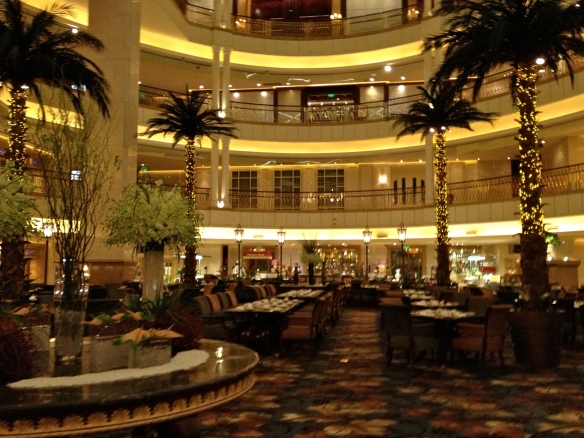 This was my home for two days: 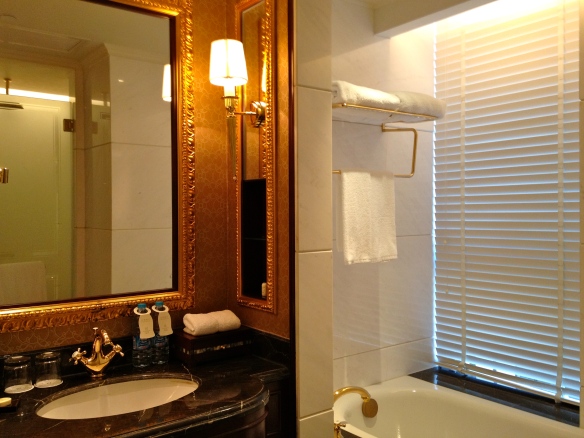 I hurried out to look for dinner. I was STARVED!!! And this was the scene right outside my hotel:

There were people everywhere! Facciamo una passaggiata! And groups of people dancing all over the place.

Unfortunately, there was no place to eat but here: 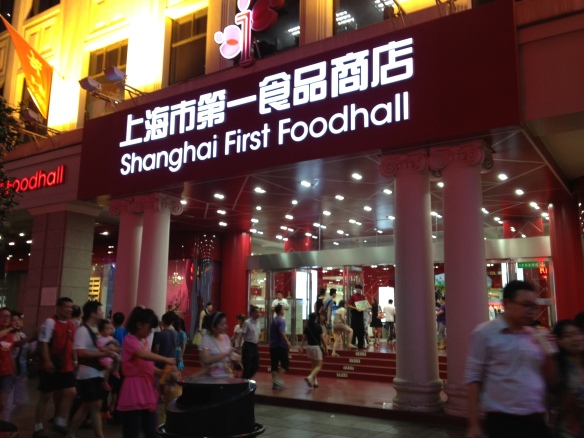 Ugh. I hate food courts. This wasn’t here the last time I was in Shanghai in 2001. Back then, there were little noodle shops with steaming bowls of dumplings and handmade noodles all over the place on Nanjingdonglu (Nanjing Road East). Now there are large malls and big clothing stores and a mega Apple store. It felt like Times Square in NYC. It was really disappointing. My meal was unremarkable so I didn’t take a photo of it.

The next day I popped out of bed, ate sushi for breakfast, and jumped into the Shanghai Metro hole again to go here: 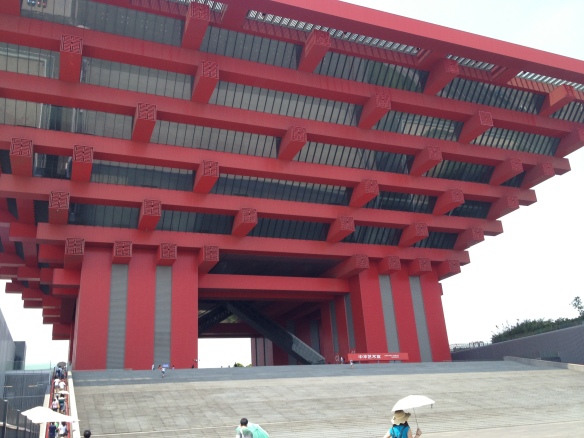 It’s the China Art Museum in Shanghai. This is their new building, opened in 2012. From afar it looks like the  Chinese character, hua, which means China, magnificent, splendid, flowery. It was every bit that.

You need to ride this very scary escalator to reach the galleries:

It was very tall. It gave me vertigo.

Once I made it inside, I was okay. And here are some of the art that I saw:

That’s a painting of Albert Einstein, above, on the morning he won the Nobel Prize. He was in Shanghai when the prize was announced.

Do you like what you see? It’s a carefully curated collection. All museums are carefully curated, of course, but this one was missing something. There was nothing here that was angry or scary, or shocking.  Nothing showed suffering or poverty, or peasants. Instead, there were lots of works depicting Mao Zedong, founder of the People’s Republic of China, as a kindly father figure, and China as a beautiful place where good things happen (like hearing that you’ve just won the Nobel Prize).

Additionally, I saw no works by foreign artists. Nothing Korean, Japanese, Russian, Indian, African, European, American. Nothing. Though there was a Chinese artist who made copies of Western works, like this:

Most of the museum goers here will probably never make it to one of the museums in the west that has an original Van Gogh sunflower painting.  Do you think it’s a good idea to show a copy? Is this fraud or forgery? Or is it an honest attempt to expose the audience to Western art? What do you think?

Nudity was also absent except for a few drawings, and male nudity, well, you can see for yourself here: 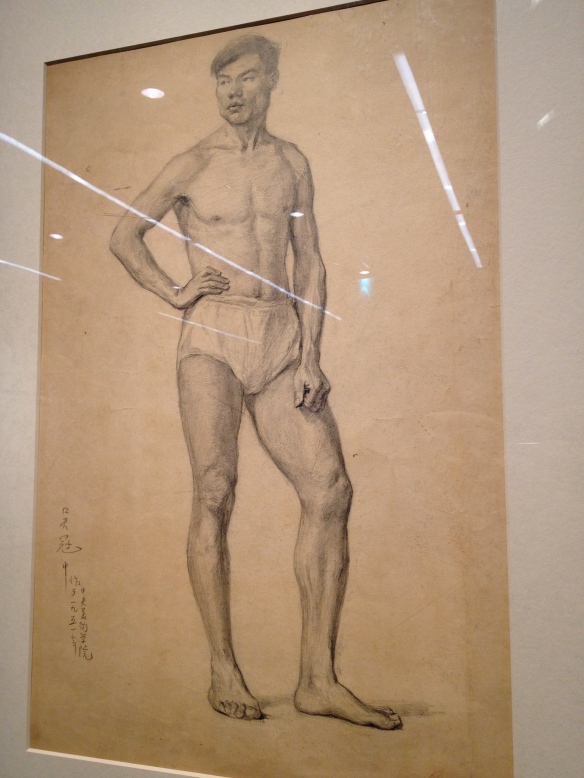 The closest it came to showing ordinary people, I think, was this:

They’re urban folk riding the metro, or something like that.

About half of China’s 1.3 billion population are peasants who will never ride the metro. They live in the countryside, surviving on the crops they grow. As recently as thirty years ago, peasants made up more than 80-percent of the population. Yet, in one of the country’s major museums, there’s no sign that they exist at all — at least not among the contemporary art.

Peasants were included, however, in a computer-animated reproduction of China’s most famous painting, the Song Dynasty masterpiece called, Qing Ming on Bian River: 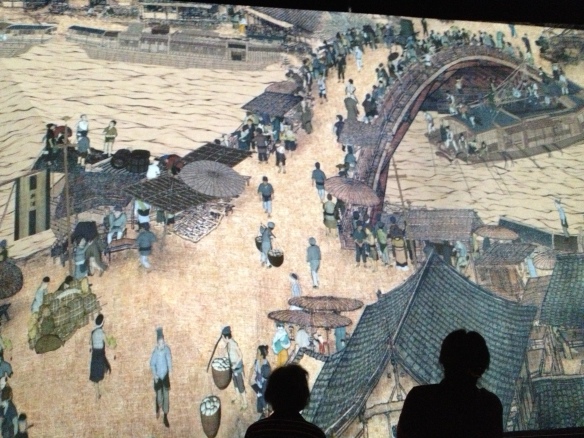 This was the highlight of the exhibits. It was really fantastic! To see a few seconds of the walking-talking animation, click here.

Chinese artists have always painted peasants as well as aristocracy (and merchants and all the folks in-between). Chinese artists today are still painting peasants. I saw some of them at the fabulous, but now-defunct Schoeni gallery in Hong Kong last year. They looked like this: 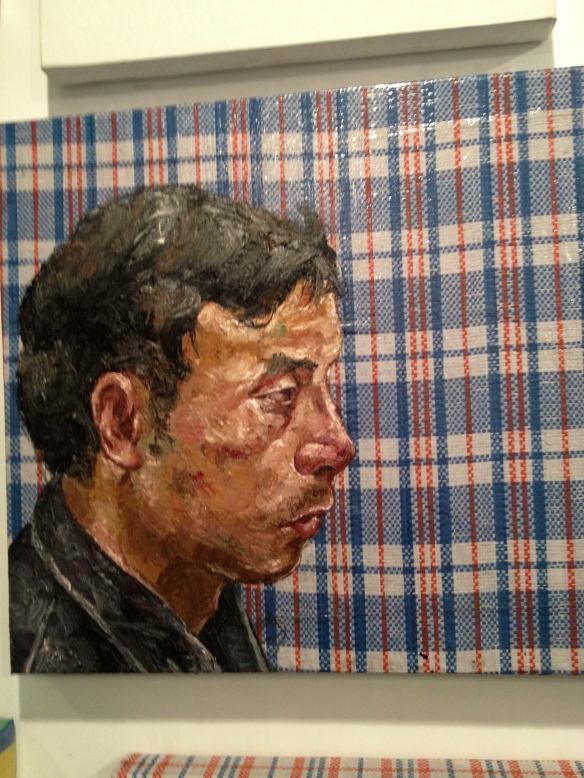 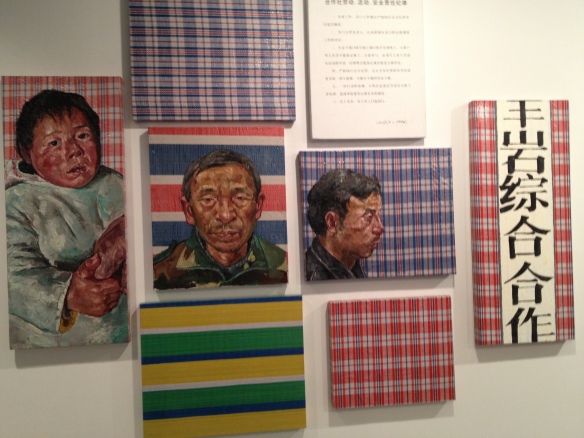 And in catalogues, more peasants: 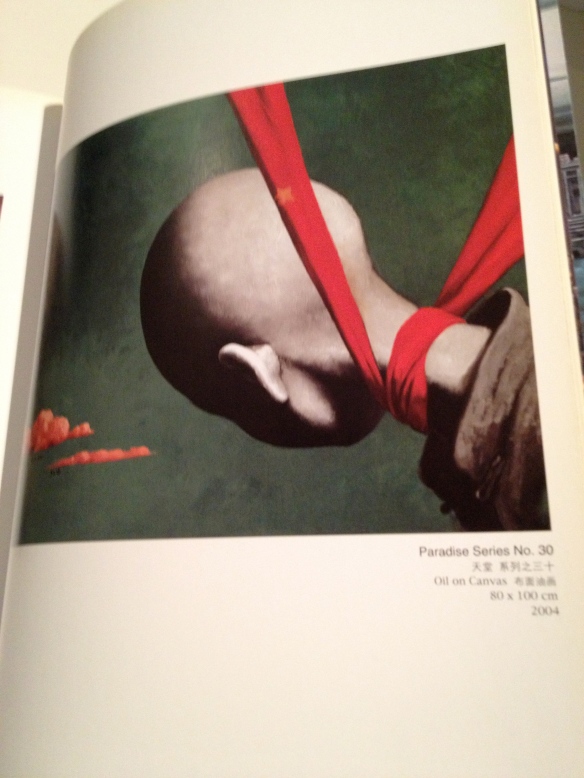 Not pretty. Really disturbing. Kind of punches you in the face, doesn’t it? But peasant life isn’t pretty. It’s hard. They farm their land. If they’re lucky, they might make about $100 a year; most of it is taken in taxes. Life punches them in the face.

Should a major museum ignore half of the population, even if this half never makes it to their doors?

What happens to a society that goes around with only one eye open?

And is that eye really open, if all it sees is Chinese art?

When you’re an author, you have to ask these questions. Your own art should never be done with one eye open. Art comes from truth. And truth requires you to look with both eyes wide open.

My summer adventures to be continued . . . (oh, I’ve turned into such a serial writer!).

9 thoughts on “What I Did Last Summer”