With another winter storm on the way, I thought I’d give you a fun snow-day project — Chinese paper cuts!

I learned to make these in Chinese school just before the Lunar New Year, which started with the new moon on January 31. People in China like to decorate their windows and doors with red paper cut-outs at New Year’s to invite luck into their homes.

Here’s the first one: 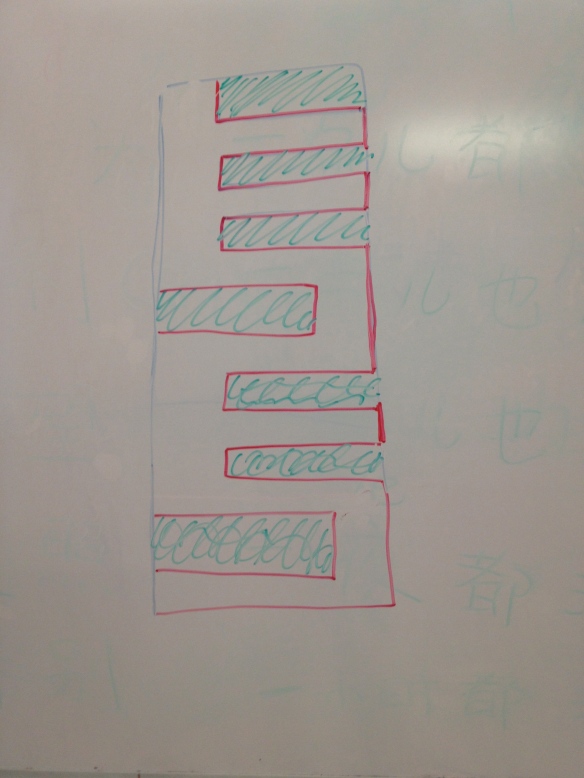 1. Fold a square piece of paper in half, twice.

2. Using a pencil or pen, draw the red lines above on your paper.

3. Cut along the red lines. (The blue parts above are the discarded pieces.) 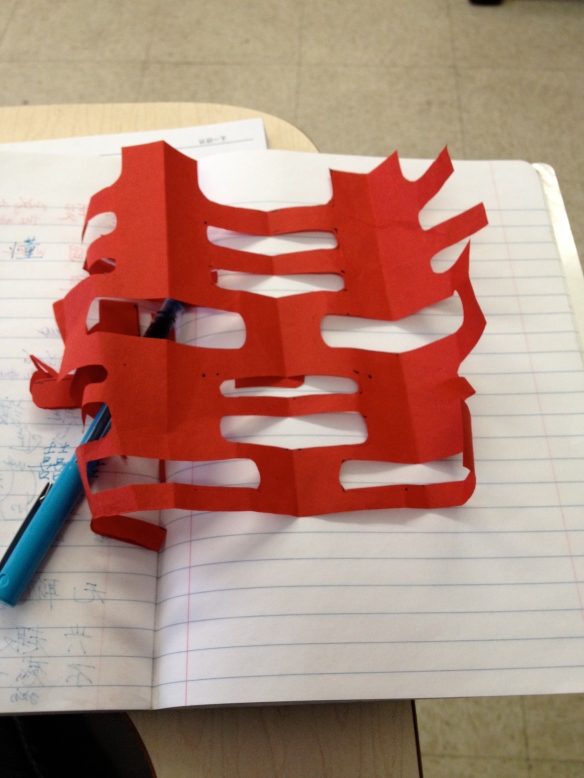 This is the character, shuangxi, which means “double happiness.” The character xi means happiness or joy, and when it’s written twice, side-by-side, it’s twice the happiness. Chinese is very logical. The symbol is used during New Year celebrations and weddings.

When you’ve practiced a bit, you can make fancier versions of this cut-out, like this: 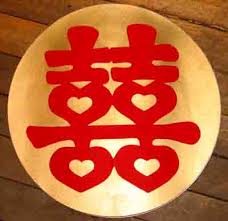 Okay, let’s not get carried away here.

If it’s a really good storm, you’ll want to go outside and scream your head off and slide around, not stay inside making a million little cuts in a little piece of paper!

So don’t even think of trying any of these:

Enough of that one.

Here’s the next cut-out I learned in Chinese school. 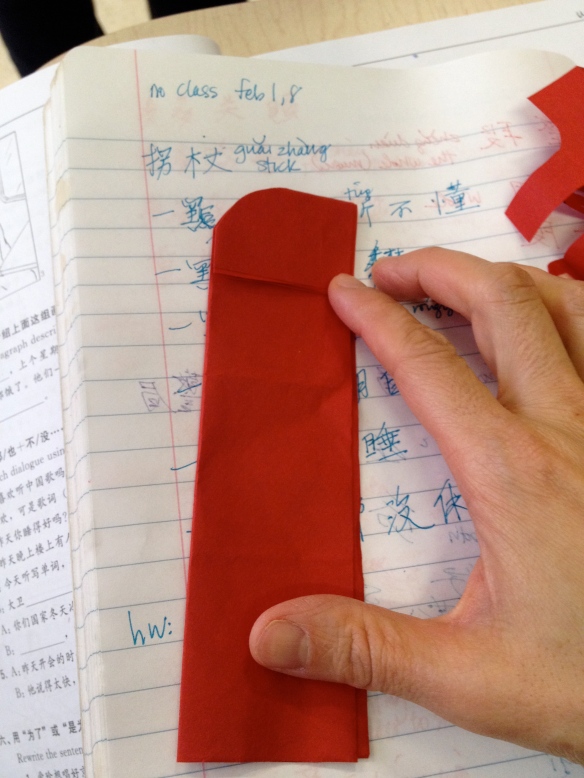 1. Fold a square piece of paper in half, and half again, lengthwise.

2. Fold the top half in half, then fold it in half again. Keep the top quarter folded down.

3. Cut a rounded corner in the top left (see above). 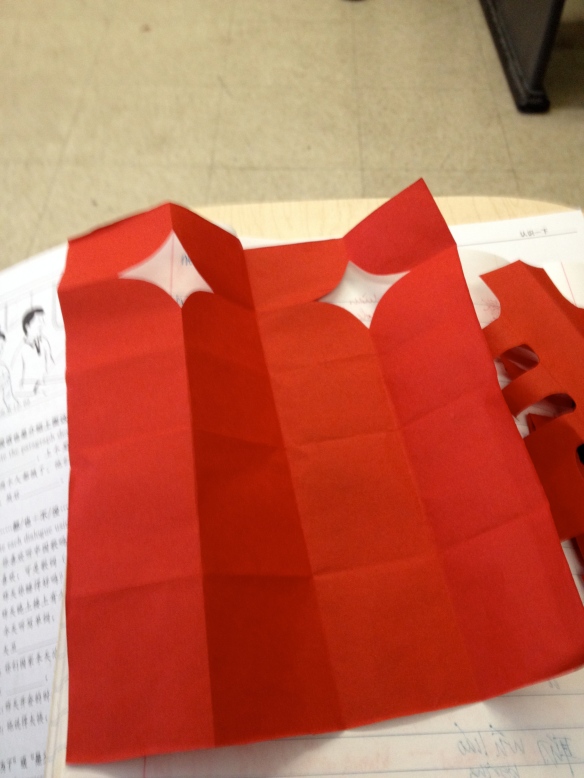 My teacher says I did it wrong. 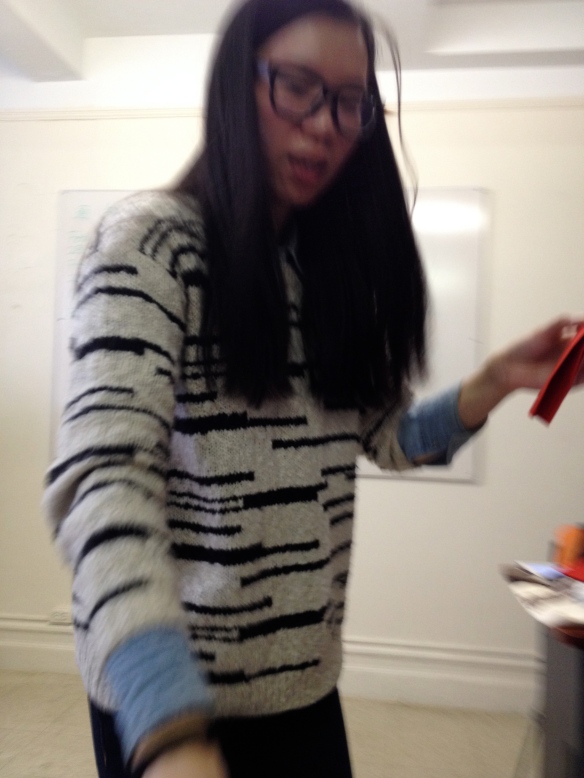 Disregard the above instructions. I had to do it over (and over) until I unfolded it, and it looked like this: 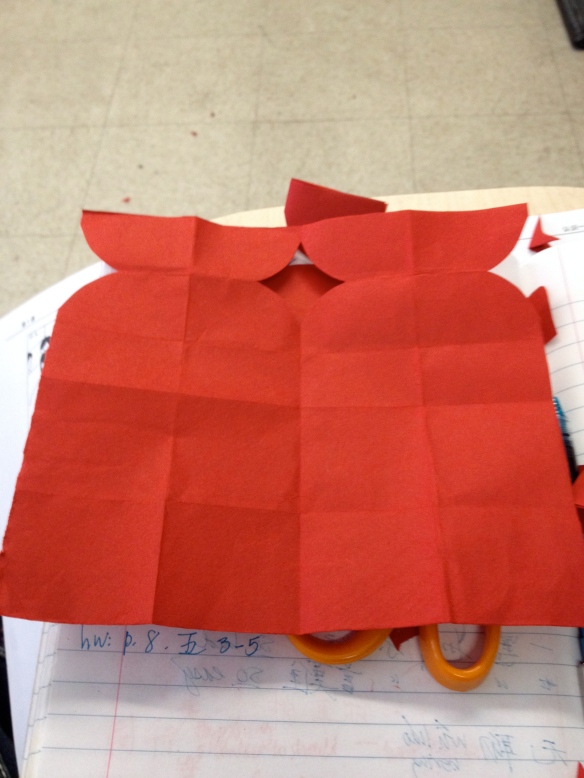 Uh, how do I explain how I got here? I don’t exactly know. But you gotta fold the paper so that all these creases show. Then you cut the corner :).

Then you fold the right side under like this: 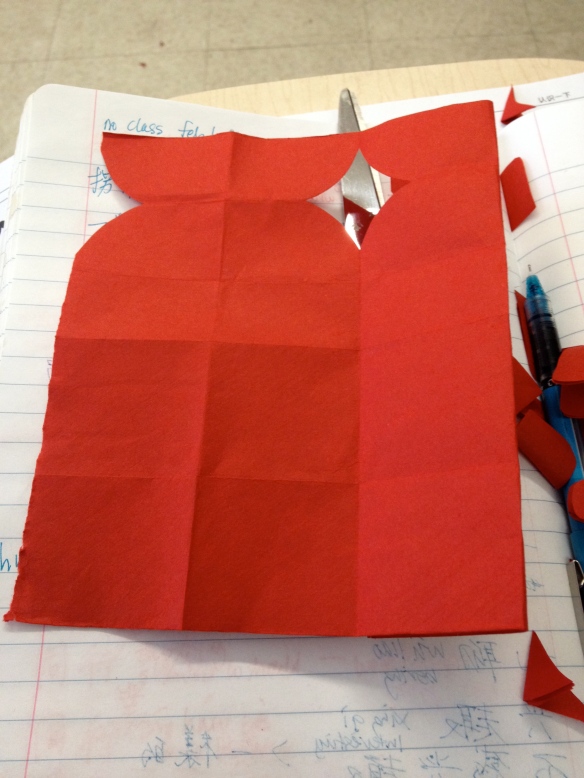 If I’ve just lost you, I’m SORRRRY!!! That’s the problem with cut-outs. They were meant for people who had nothing to do in ancient China but sit for a thousand years along the Great Wall and be on the lookout for scary barbarian invaders who couldn’t come until the snow melted. When you try to do an ancient snow-day project nowadays, it just makes you want to SCREAM, doesn’t it? AAAAAAAAAAAAAAAAAAAAAAAAAAAAAAAAAAAAACK!!!!

Here are my classmates, Joanna (left) and Donna, cutting away: 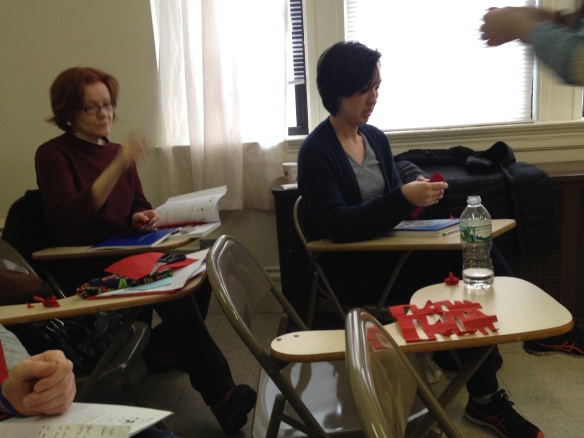 Yes, you, too, can do this without having a breakdown.

Okay, now take a deep breath like in yoga — and fold the bottom half up, then draw a triangle with your pen above the bottom fold and along the vertical crease like this: 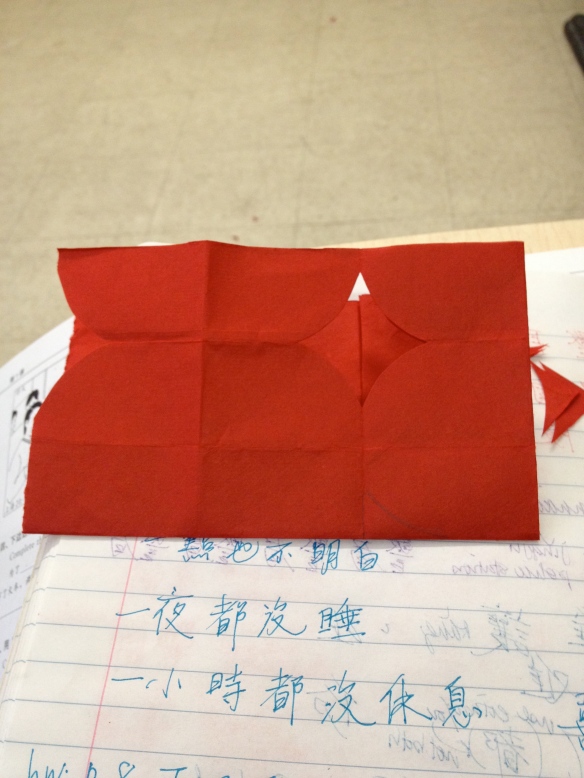 Then you snip out the little triangle.

When you unfold half of the bottom, it looks like this: 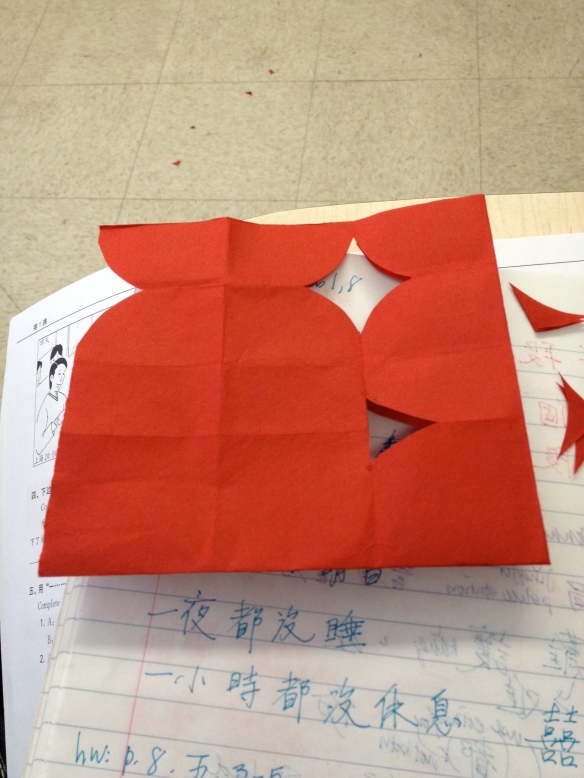 After that, you draw these lines: 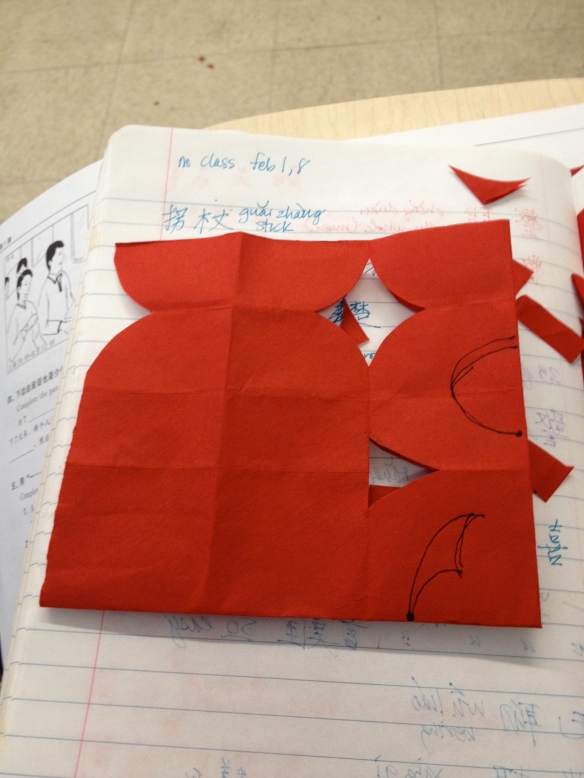 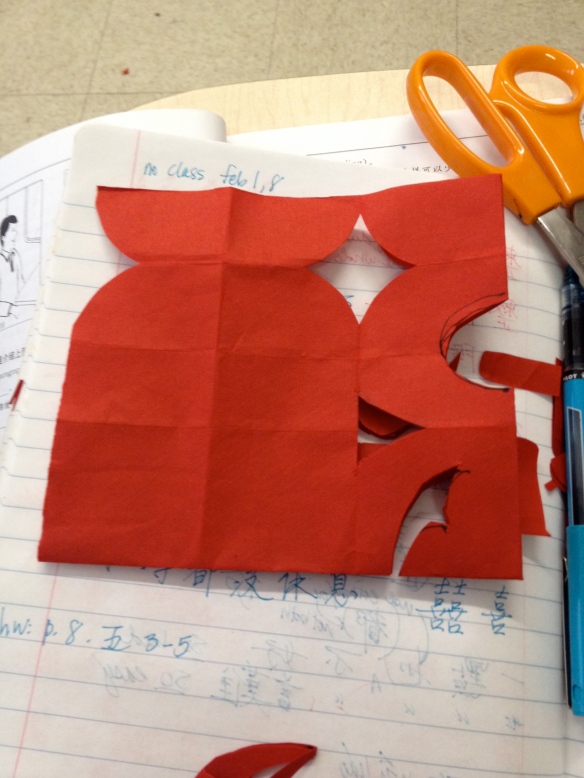 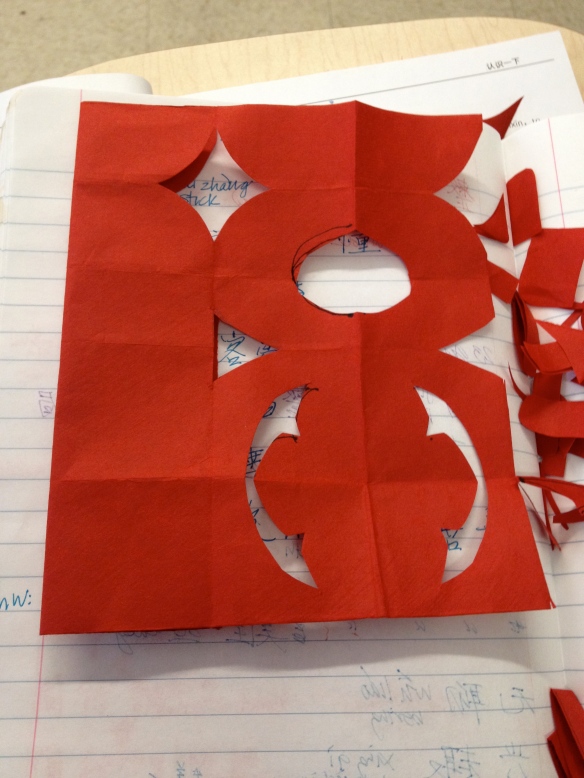 Time to work on the left side.

Draw a line to match the cut on the left side below, and cut along the line: 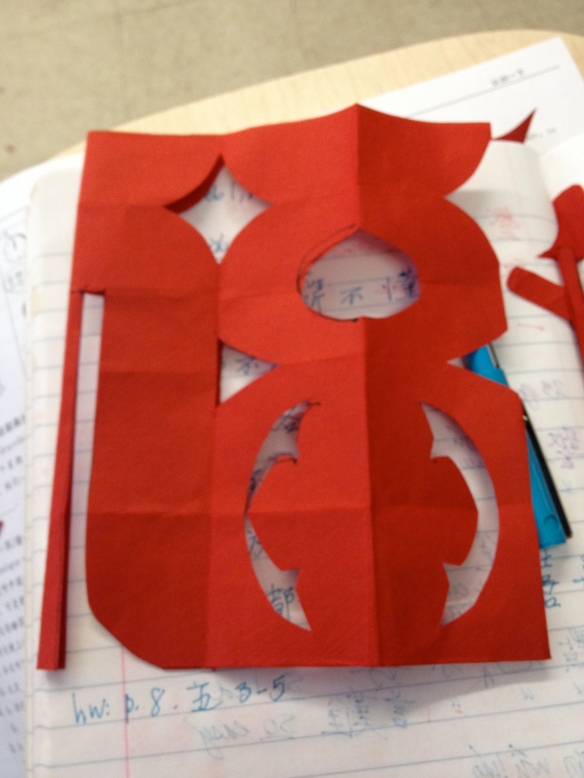 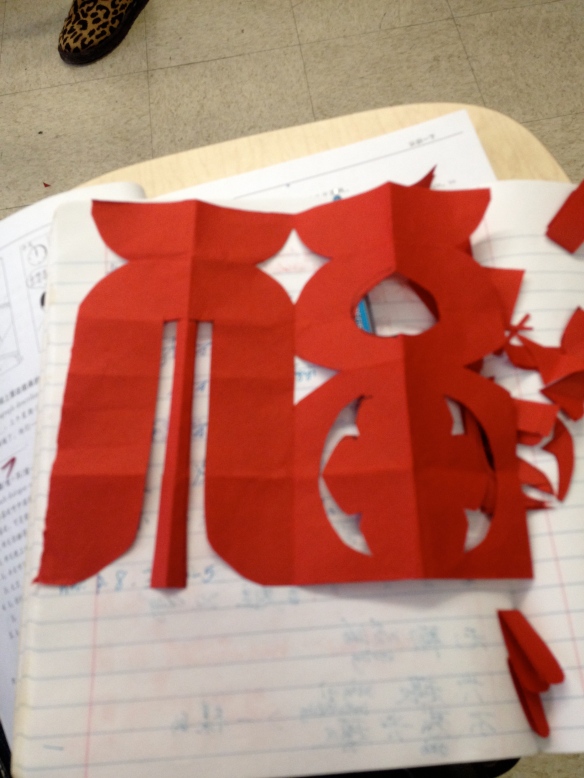 This is the Chinese character, fu, which means good fortune, luck, or prosperity. 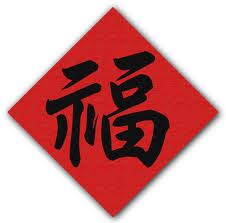 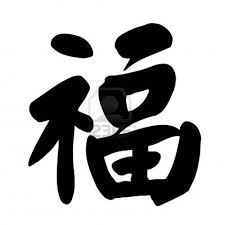 Families in China often turn it upside-down when they put it on their door at New Year’s: 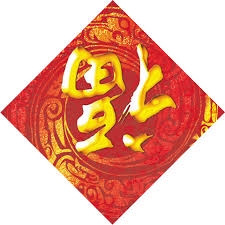 When it’s upside-down, it resembles the character dao, which means “arrive.” So it announces that good fortune has already arrived at this house. 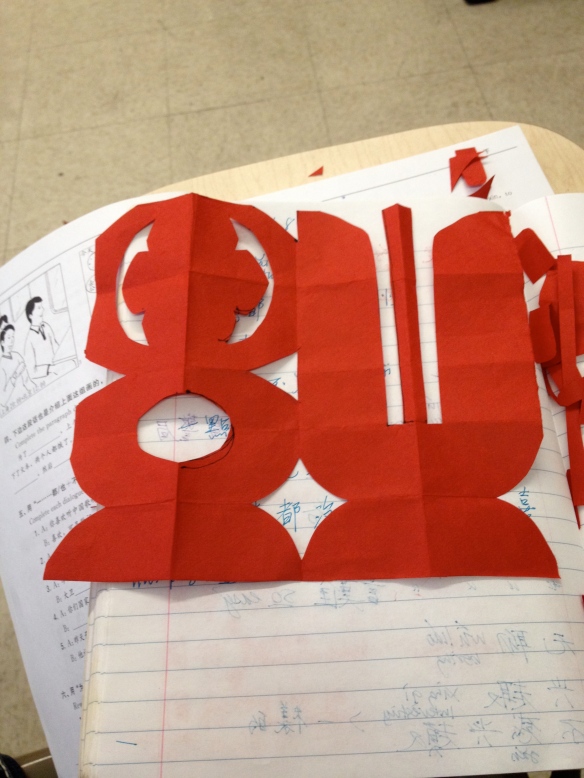 Looks like good fortune has arrived on my notebook! 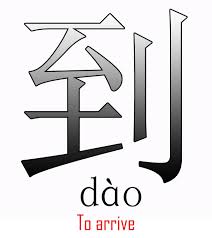 So there you have it. A snow-day project from ancient China when it really snowed. It’s especially appropriate since Lunar New Year celebrations will continue until the full-moon on February 14.

Speaking of really snowing, here’s the character for snow, xue:

The top part is the character, yu, “rain.” And the bottom is used in characters for broom and sweeping. So snow is rain that can be swept. Isn’t that cool?

If only I knew how to cut that. Then we would hang it upside-down from all our doors and have a really fantastic, buried-to-the-rooftop snow day!!!

Hope we have one anyway!

3 thoughts on “How to Make Chinese Paper Cuts”