He’s nine. He’s in the fourth grade. His birthday is in June.

He won the Dead Bodies Giveaway on this bloogie last month, guessing correctly that I will be traveling to China and Hong Kong soon to research my next ALVIN HO book. Congratulations, Aidan!

He first wrote to me when he was six. This was his drawing of Alvin:

“Alvin Ho is scared in the dark.”

He wrote the above caption next to it. Poor Alvin.

On the other side, Aidan added, “you can write me back if you want.”

So I did. When you’re an author you must write back. Your fans keep your books alive. Without them, your books will die. And it takes great effort to write to an author. First, someone has to decide you’re worthy of the trouble. Second, they have to be in the mood. Third, if a parent is around, it means spelling everything correctly. Fourth, usually this means using a dictionary. And an eraser. And missing after-school cartoons.

So I always write back.

This is Aidan getting my letter:

Aidan receiving my letter after he turned 7.

Okay, so it took a while for me to write back. But at least he hadn’t turned 70!

“How to avoid Drowning”

He was taking swimming lessons and going to Chinese school (just like Ruby Lu!). He also wrote that he liked history and was looking forward to visiting “Springfield, the capital of Illinois. Abraham Lincoln is one of my favorite presidents.”

A cheerier letter came from Aidan at Christmas:

Wow! He even signed it with his CHINESE name! And Chinese, as everyone knows, is not easy to write. First, you have to be in the mood. Second, each stroke goes in a specific direction and follows a strict order. Third, you cannot make any mistakes. Fourth, if you make the slightest mistake, everyone will see it right away and know that you are a nimcompoop — if you’re in China.

But we’re not in China, are we? Anyone can see that a 7-year-old who writes to an author more than once and signs his name in Chinese is brilliant!

So I thought it would be fun to do an interview with Aidan, and I’m very glad he said yes! Here it is, just as he wrote it:

L: What kind of books do you like to read?
Aidan: I like to read nonfiction books about science and history.  I also enjoy reading fantasy books.  I collect Tiny Titans and Superman Family Adventures comic books.

L: Name one terrific book you read this summer.
Aidan: I really enjoyed reading Ungifted by Gordon Korman.  It is about an ungifted student who is a troublemaker who accidentally gets moved to a gifted school.

L: When did you first hear about ALVIN?
Aidan: I read the first Alvin Ho book in 2009 when I was 6.  My dad got it from the library for me.   Now my 6 year old sister is reading Ruby Lu.

L: Is there anything about you that is like Alvin?
Aidan: Alvin is like me because he is funny.  I also have some phobias like Alvin which are acrophobia, entomophobia (only the real big ones), oneirophobia (just some of the bad ones), and glossophobia.

L: How did you know he’s going to China and Hong Kong?
Aidan: Since Alvin is Chinese American, I figured he was probably going to China.  Also he says some Cantonese words so I guessed Hong Kong because they speak Cantonese there.

L: What do you think he should see while he’s there?
Aidan: Alvin should see the Great Wall of China and the Terracotta Army.  Maybe he should also go to the Forbidden City.  He should also eat lots of strange food.

L: Will he make it back?
Aidan: No, but Alvin gets a grave marker which says, “Here lies Alvin Ho who died brave scared and true busted on the Great Wall of China.  May he rest in peace.”  Actually, he will probably make it back eventually.

Here’s one last shot of Aidan when he was Alvin’s age: 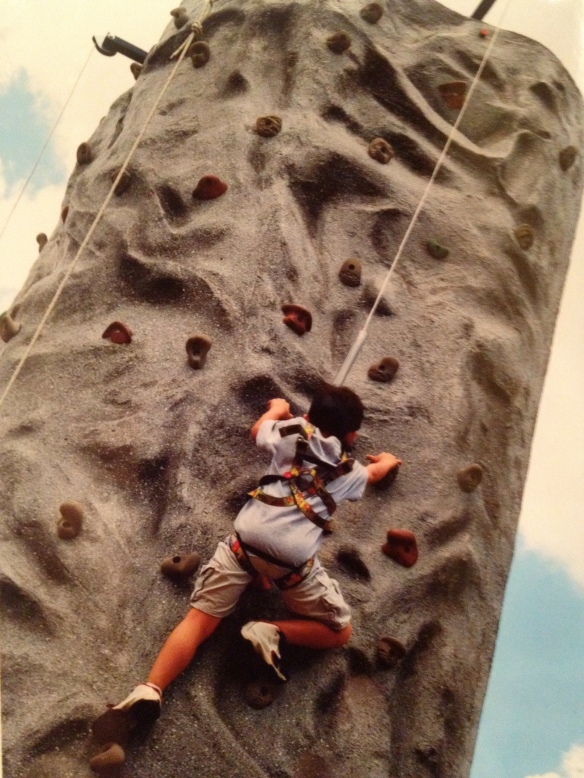 Aidan, Not Allergic to Toeholds or Numb Fingers! Wow!

And just so you know, it was Aidan who volunteered his dad recently to give this glob a much-needed EXTREME MAKEOVER. When you’re an author, often you have to rely on the kindness of strangers.

Then they’re not strangers anymore.