SHAOLIN TEMPLE — 6 November 2012 — The day after I played hooky did not start so well.

First, I had to do extra laps around the temple.

Then I got a lecture.

“There’s a saying,” my shifu began. “Once a teacher, always a father.”

His eyes looked into the bottom of me.

I looked backed. I saw a face both young and old. He could be 20, or 2000; he was both child and ancient. It was very strange to me, this quality. I’d never seen it before, but saw it at once when my Kung Fu lessons began. Now he was serious but not severe. Gentle, but firm, like a father with a prodigal child. He had called last night to make sure I had returned safely, and on the phone he said he had been “danxin” — worried — literally, ‘carried in the heart”– about me all day. He still looked danxin.

“Once a student, always a mother,” I said, trying to be witty, but I was no match for Chinese idioms. My words came out in white puffs in the pewter morning light. Golden ginko leaves swirled around our feet. The courtyard was quiet.

He looked into the bottom of me again.

There is no such thing from where I came. Nothing is forever in the west. The word is seldom heard — maybe in confessions of love — but even then, sadly, it’s rarely truly forever.

Was this a confession of love? When you’re in the fourth grade, it’s a yucky question. But when you’re an author, it’s a question you have to ask. Love sells LOTS of books!

Something in his face said no.

But a balloon of panic filled my chest anyway.

I didn’t sign up for forever. I don’t even know what that means.

In that long, slow moment in which we stood silently in our dove grey monk clothes, and in our Kung Fu shoes that held us on that stone floor in the courtyard that had been burn and rebuilt, and burned and rebuilt a sqillion times over a sqillion years, the earth moved and rearranged herself for me. 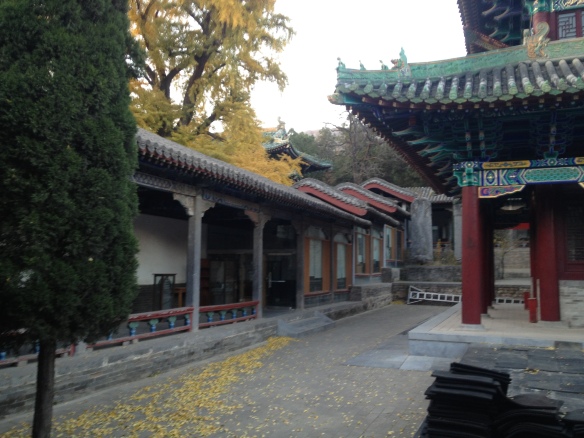 I was standing in forever.

By accepting his invitation to learn Kung Fu, I had accepted his invitation to be connected to an ancient culture. I had stepped into an ancient honor code. I had taken my place in that courtyard where countless other disciples have stood with their masters. The master-disciple relationship, I knew from all those TV shows I watched as a child, but had forgotten — is a sacred bond that never breaks.

“If you leave early,” my shifu continued. “It will hurt our relationship forever. When you come back to Shaolin it will not be the same for you.”

“Next summer,” he said. “For one hundred days.”

He was not kidding. Then he said a bunch of Chinese words I didn’t understand. All I heard was something about destiny. And listening. Kung Fu. And his way of doing things?

A million thoughts swirled in my head. When I got back from Luoyang last night I had made hotel reservations for Shanghai and Chengdu. My travels were pulling me in two different directions. To the east, I was planning to visit the Shanghai Art Museum where I would get a peek at China’s modern face through the works of contemporary artists. So much of Chinese culture looks to the past, and as an author, it’s important to see what is pointing to the future. After that, I was going west to Chengdu to visit the newborn pandas. Shaolin Temple, located in central China, is smack in the middle from these two places.

“But I’m here to do research,” I protested. “There’s so much else I need to see.” I had told him from the beginning that I was visiting Shaolin so that I could include Kung Fu in a book for children. When you’re an author, you always have to say what you’re doing. You should never do research “undercover” — you’re not a detective, you’re a writer. And the first rule  of being a good writer is honesty.

“You will stay until Sunday,” came the answer. “You leave Monday.”

Yikes! He just gave me TWO ADDITIONAL DAYS on top of the seven.

If I had known this was going to happen, I never would have played hooky! It was a HUGE stone into the lake. How was I ever going to get out of this one without causing HUGE offense???

Before I could say anything, two monk brothers suddenly appeared out of nowhere and wanted to know how my training was going and who did I want to win the U.S. elections?

It was election day back home and I hardly knew it.

I was not in the mood to discuss politics.

But I was in the mood to have some company. It would give me a chance to think of the right words with which to tell my shifu that he was being totally unreasonable and that I had an itinerary to keep. How do you say unreasonable and itinerary in Chinese??? I had no idea.

But I could say that I voted for Obama a month ago, though I didn’t know how to say absentee ballot, so they told me. These were two monks who came often for tea and a chat, bringing with them much laughter and knocks on the head for my shifu. They said they liked Obama too, and wanted to know why I liked him.

So as I started my Kung Fu stretches, and before my shifu chased them away, I gave them my simple-Mandarin version of American politics: Obama helps the poor, the other guy helps the rich.

Help the rich? What a preposterous idea! Heads shook. Arms waved. Lips curled. Shaolin monks are fierce warriors — but you’d never know it except for the daggers that flash in their eyes when the sun hits them in a certain way. Then you know they’re battle-ready, even when they’re sipping tea from delicate cups.

Or giving me tips and helpful hints.

Or stopping a bossy shifu from filling an entire lake with stones.

It was the only way I got through Kung Fu this morning, you can be sure of that.

Then things started looking better for me at lunch. My shifu gave me his bigger bowl. (Maybe he was feeling guilty!) And this is what I filled it with in the monks’ dining room:

Crispy fried tofu and vegetables! The bread was warm and soft. I really love Henan food, it’s SO delicious! But my shifu made me bring it back across the courtyard, to the calligraphy room, to the tea table where we always have tea, and eat my lunch alone with him. Have you ever gotten so busted that your parent or teacher made you sit with them, away from the other children? No more sympathetic monk brothers for me 😦 !!!

Then after lunch, just before my afternoon training was to begin, my shifu invited Felix to join us. 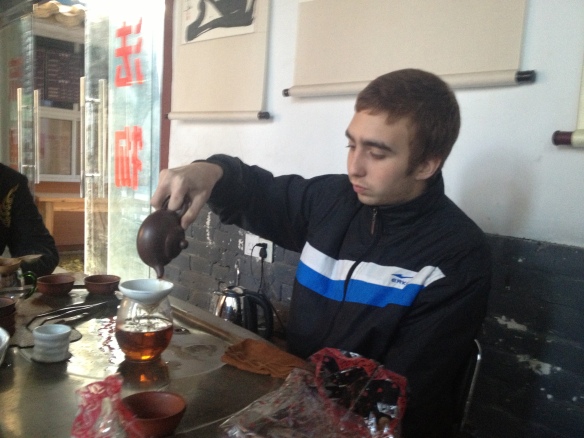 Felix is from France. He’s 20, and he’s training to be a monk. He’s been at Shaolin for a year and his Chinese is better than mine. My shifu felt that the things he said to me this morning were zhongyao — of great importance — and he wanted to be sure that I understood. So Felix came to translate everything into English.

I was getting the same lecture twice!

But Felix also filled in what I missed: “You are the first female student ever to study at Shaolin Temple. He is not just teaching you Kung Fu, he is also teaching you his lifestyle.”

Then Felix added a few words of his own, “I have never seen or known of them to allow a woman to study here. It’s an honor.”

I sipped some tea.

After my shifu and Felix finished, I asked Felix, “Why do you want to be a monk?”

Gulp. There was that word again.

BUT I DON’T WANNA BE A MONK! I wanted scream. But I didn’t. It would have been very rude.

Then Felix said he would be happy to translate for me. Was there anything I wanted to ask my shifu?

“TELLHIMTHATIDON’TNEEDATEACEREMONYEVERYTIMEISAYI’MTHIRSTY,” I said. “I ONLY WANT A SIP OF WATER!!!”

Felix did not translate. Instead, he turned to me and said, “You can’t drink cold water, it shocks the body. And you’re not supposed to drink anything during training. You drink when you’re finished. The tea ceremony is part of the lifestyle.”

I didn’t know what to say.

It was a really LONG time until next Monday.

I could pass through Shanghai, Chengdu and Lijiang (to hike Tiger Leaping Gorge) by then.

I could pack quickly and leave.

I could forget about doing things the eastern way.

I could forget about being polite.

Or I could surrender to something I didn’t understand, accept my “destiny”, trust it and let it take me wherever it may.

And ruin the rest of my itinerary, forever.

But first, I surrendered to a calligraphy lesson. 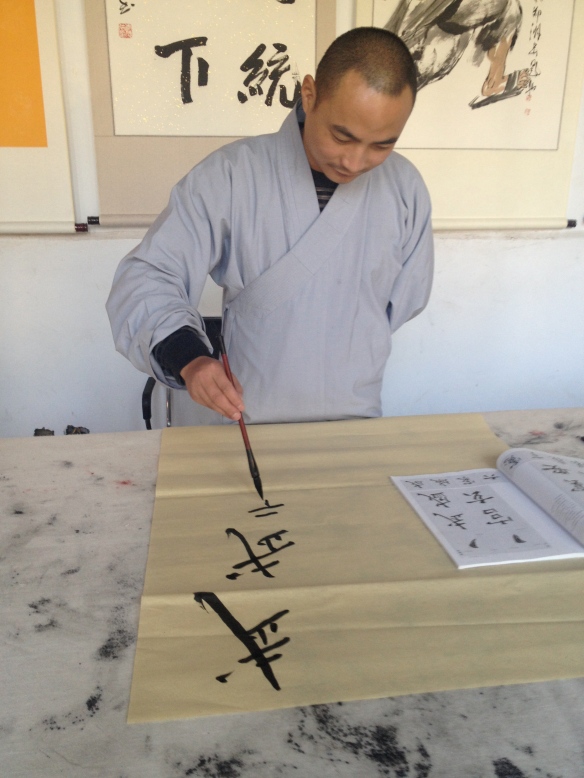 It was very calming.

Calligraphy is considered to be the highest of the arts. It pulls together the body, mind and spirit. Your strokes are said to reveal your character.

I could make one stroke all afternoon.

And be completely present in the ink at the end of my brush.

And think of nothing but making that stroke.

Until I notice the colored paints beside me … 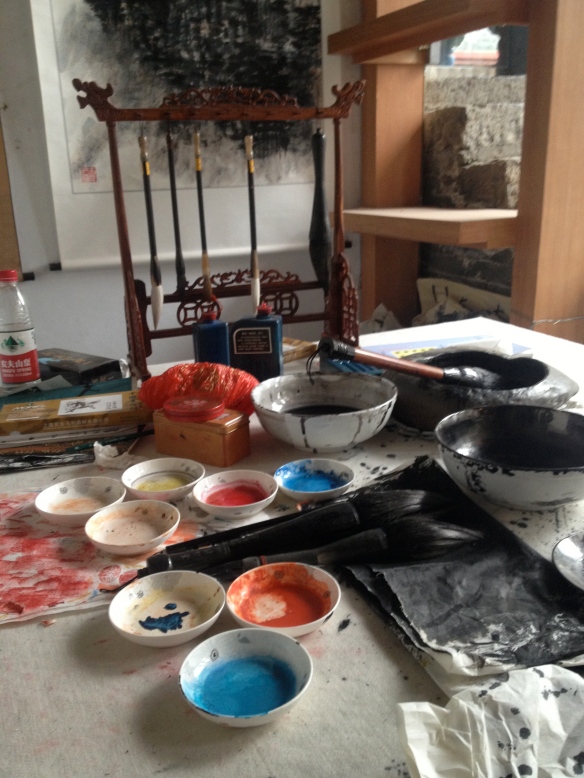 if I could do something 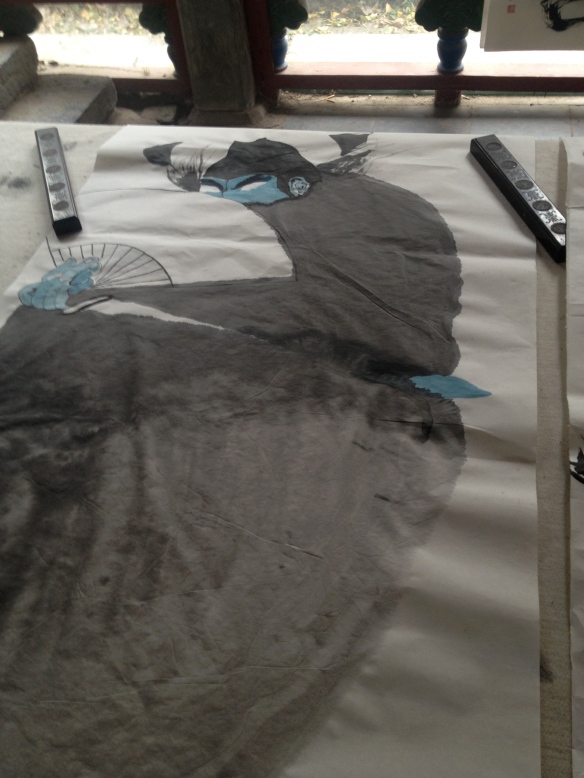