CONCORD, MA — 1 January 2013 — Walden Pond looked so beautiful in the snow that I had to stop by and take a few photos of it before leaving Concord today.

But before you can get to the pond you have to park your car in the lot across the street. It costs five bucks.

Then you walk past the replica of Henry David Thoreau’s cabin. 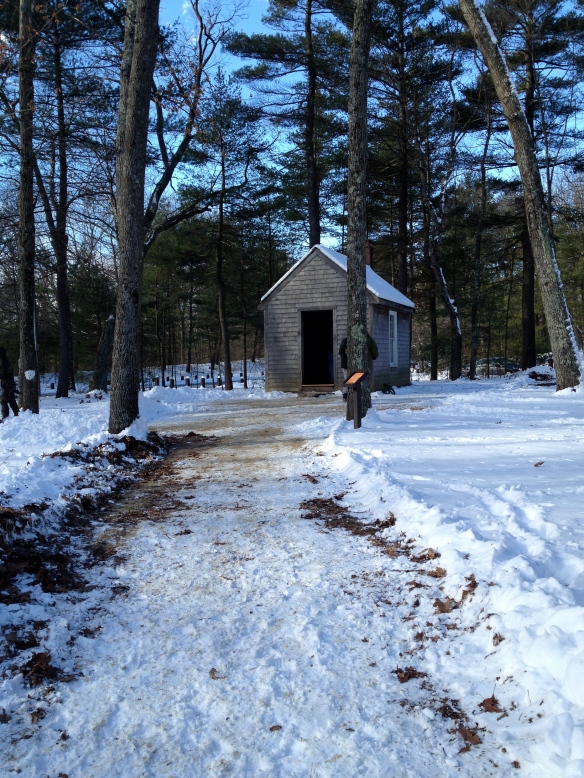 Right outside the cabin Henry was packing a good snowball: 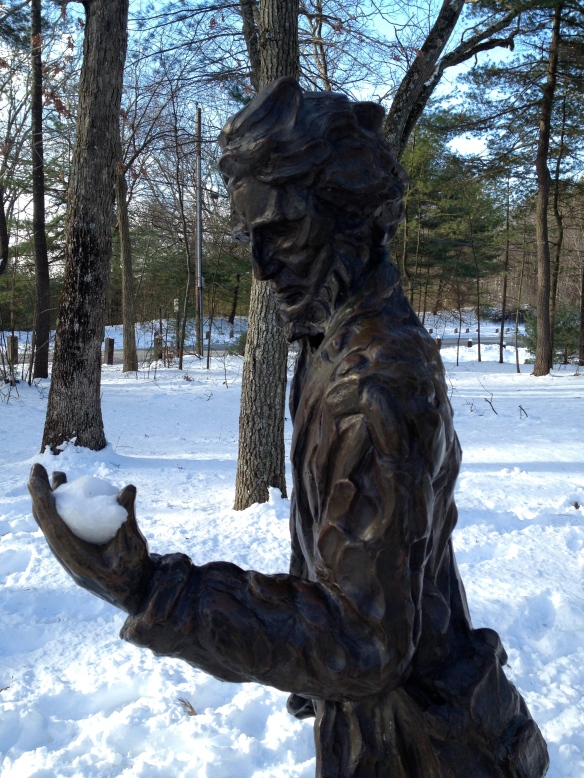 Normally, Henry isn’t home. He goes out for long walks and leaves his door open so that you can walk right in and sit for a spell if you wish. There are three chairs. A desk. A bed. And a wood stove. 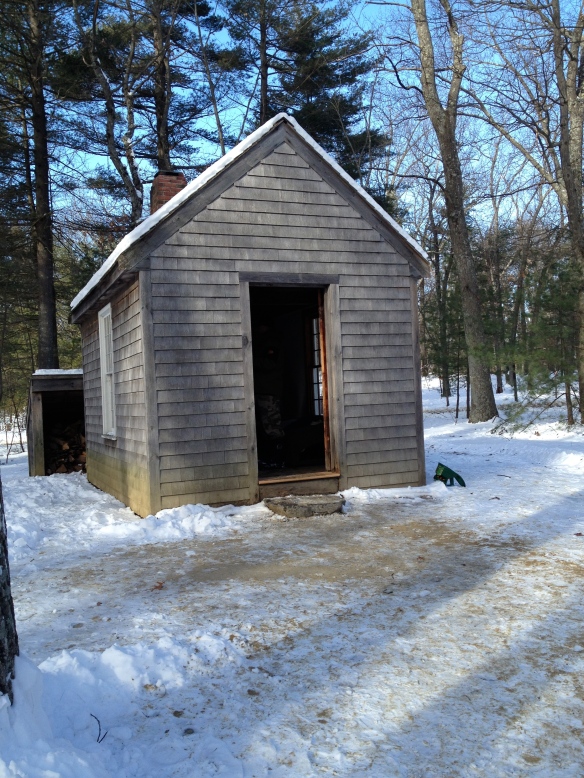 But today was not normal. It was New Year’s Day! 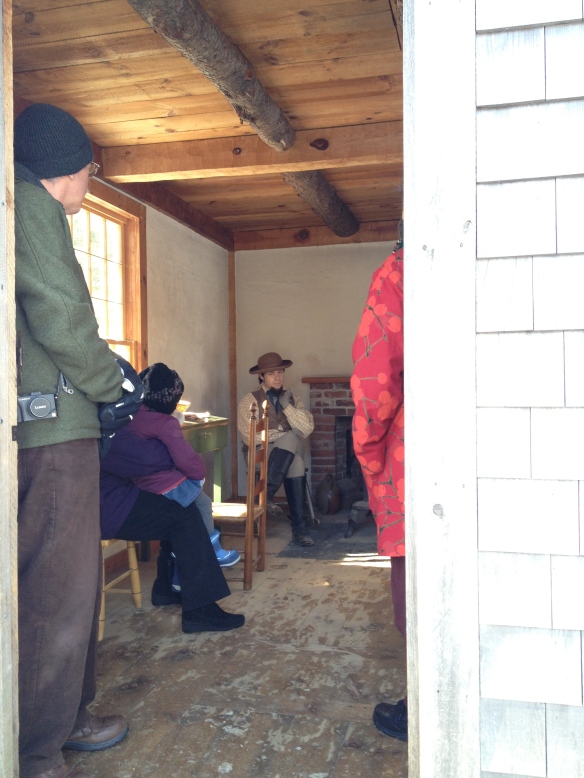 Wow! I had no idea! What an unexpected treat!!! Alvin’s been telling everyone how scared-out-of-his-mind he is of all the creepy dead authors in Concord who still live in their homes giving tours, and now you can see for yourselves!

The Inspector of Snowstorms and Rainstorms was inspecting an icicle. 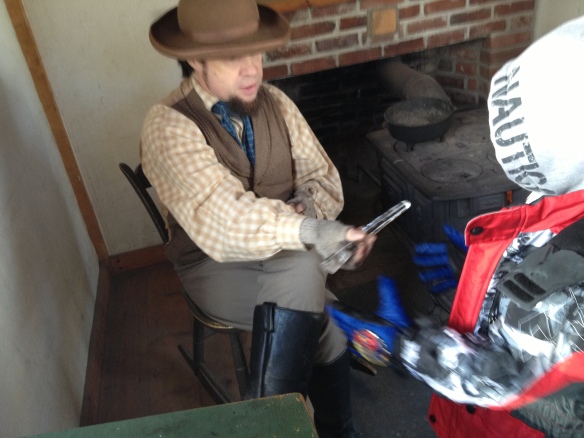 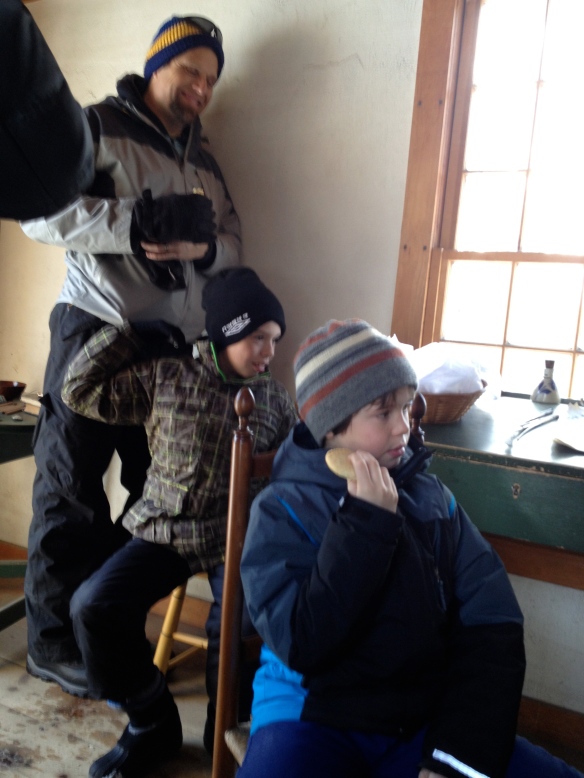 In fact, his mother and his sisters, Helen and Sophia, had stopped by earlier with New Year’s Day cakes, which Henry generously shared with all: 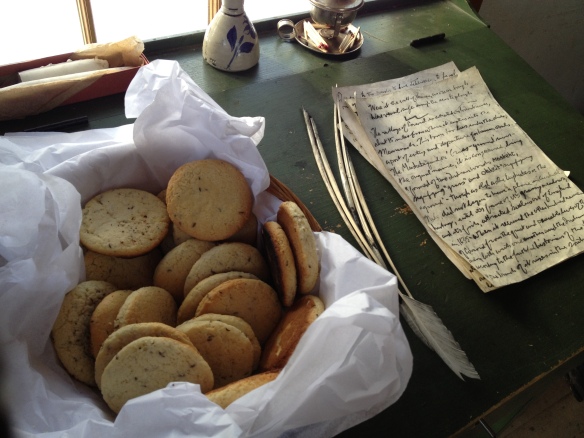 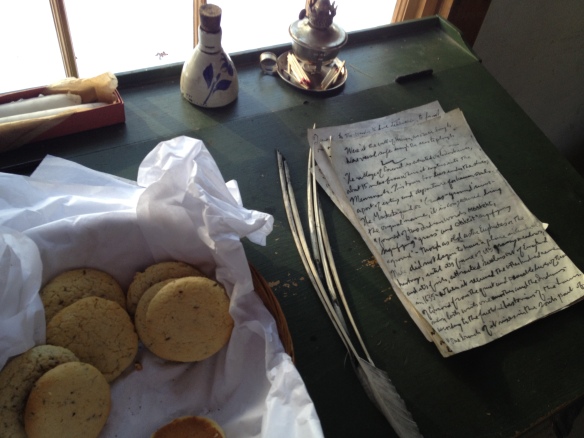 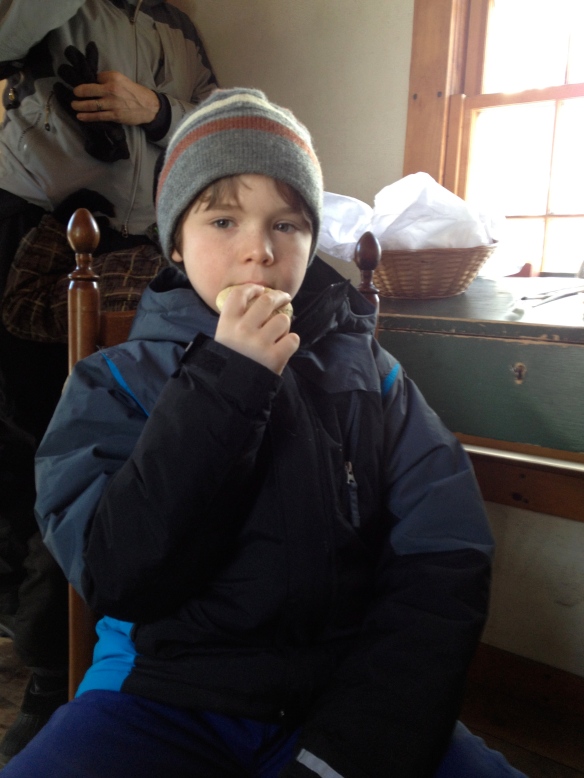 And Henry, who loves to talk, was in a talking mood. 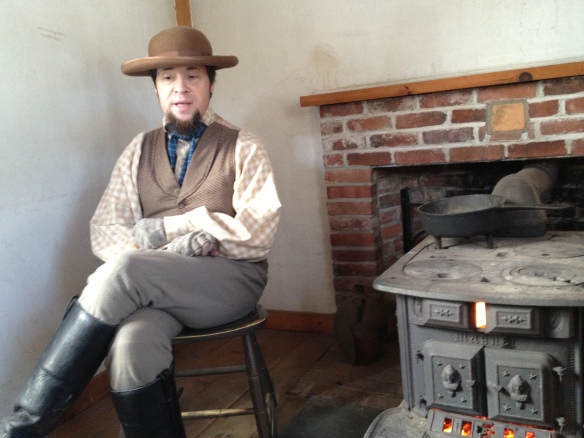 The year is 1847. Henry was looking forward to his 30th birthday. He had been living in his cabin (and going home for dinner almost every night) since July 4, 1845. He had come out to write his first book, A Week on the Concord and Merrimack Rivers. And it was an experiment to see if he could live with less. Less money. Less space. Less everything. 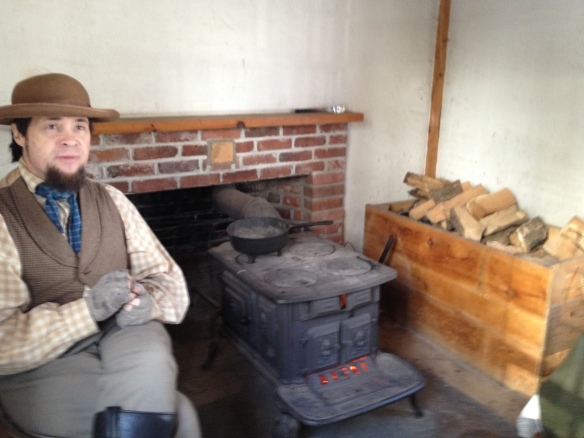 Families in Concord typically burned thirty to forty cords of wood each winter to heat their large homes, he said. He burned far less to warm his tiny cabin, but felt that the space was still too large.

Henry had built his cabin with his own hands, and the materials cost him twenty-eight dollars, twelve and a half cents. He said he had learned construction from his father by helping him build their family home in town. The wood stove is from his father.

Henry said he also wanted to see if he could live by working only one day out of the week and devote the rest to thinking and writing. This was the reverse of the Yankee tradition of working six days and resting one. To earn money (he said he didn’t need much, and anything more than necessary was too much), he worked as a surveyor, carpenter and in “many other trades,” earning seventy-cents to one dollar a day.

“…men labor under a mistake,” he wrote in his book, WALDEN, which is about his living experiment in the woods. “The better part of the man is soon plowed into the soil for compost.”

Henry’s own parents worked endlessly — his father owned a pencil factory, and his mother took in boarders, to support “necessities” — “Food, Shelter, Clothing, and Fuel.” The mistake, he felt, was that people robbed themselves of being truly alive by the “excessive toil” required to maintain necessities at a level that they honestly believed left them “no choice.” “Our houses are such unwieldy property,” he wrote, “that we are often imprisoned rather than housed in them; and the bad neighborhood to be avoided is our own scurvy selves.”

After all his yummy cakes had been eaten, Henry went outside. 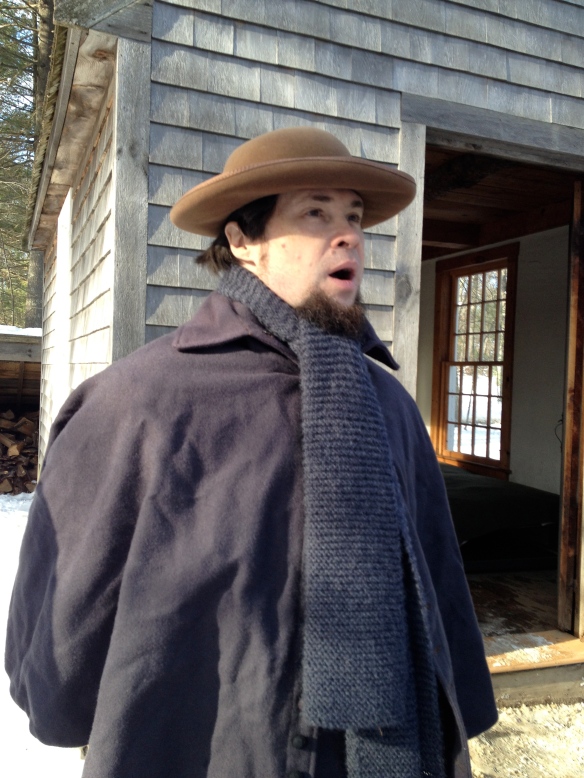 “Why haven’t you been home the other times I’ve come by?” I blurted.

“I go for walks in the afternoons,” he said. “I’m never home then.”

So then he took us for a hike. 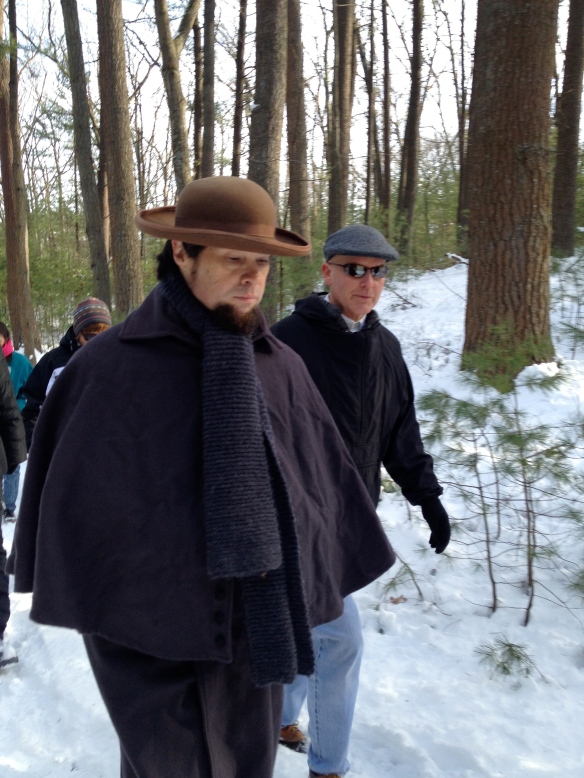 Here he stopped and instructed us close our eyes: 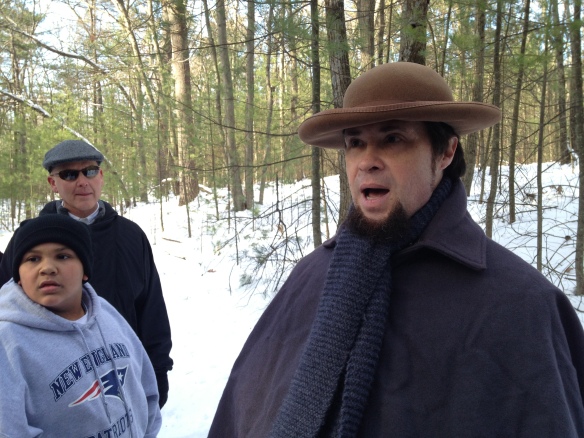 “Listen to the sounds of Walden Pond,” he said. 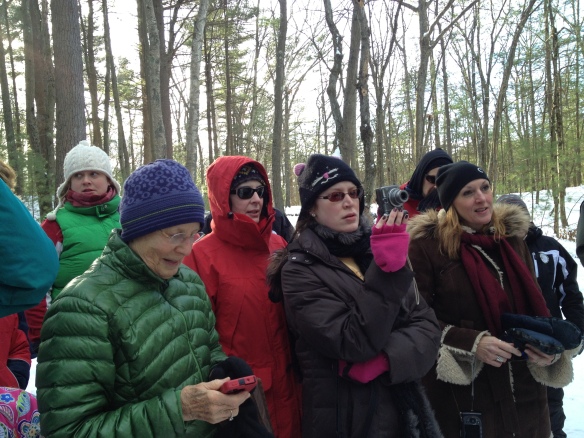 “Breathe deeply,” he added. “Smell the smell of Walden Woods. Use all your senses to experience it.”

The air was super-duper cold and clear. The sky was vibrant blue. The snow was fire white. The wind alternately whistled and roared. And the trees sang and rapped for their lives.

After that, Henry made proper introductions to Walden Pond/Thoreau Cove:

Then historian Richard Smith, a k a Henry, took us up the hill to the cabin’s original site: 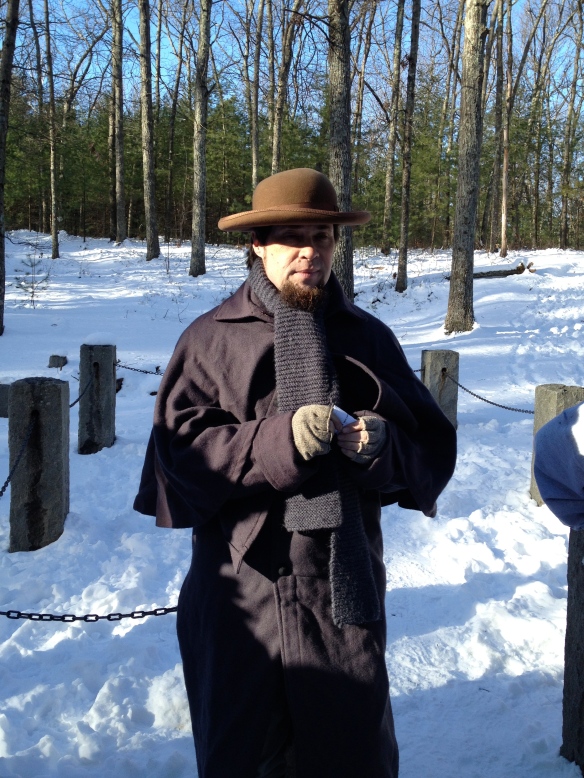 And explained that he had to step out of character because Henry would be shocked beyond words to see that his house was not there.

He read a quote from Henry: “Each town should have a park, or rather a primitive forest, of five hundred or a thousand acres, where a stick should never be cut for fuel, a common possession forever, for instruction and recreation….All Walden Wood might have been preserved for our park forever, with Walden in its midst.” 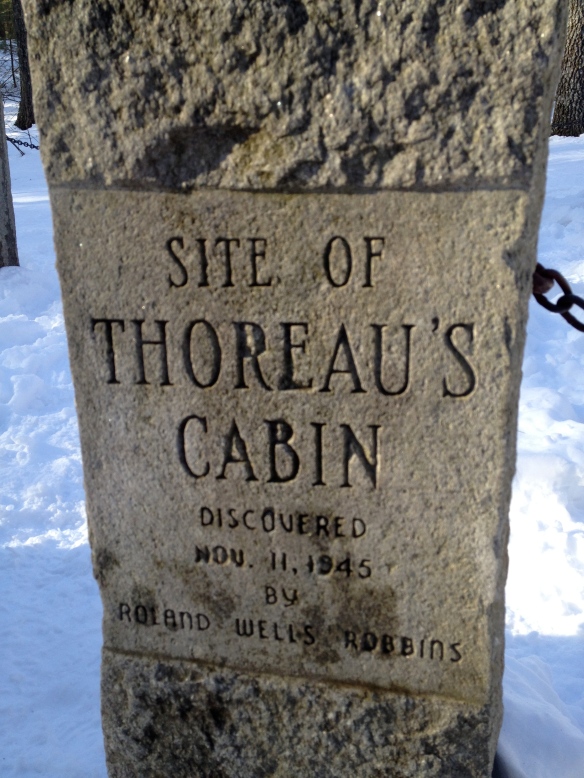 The land belonged to his friend, Ralph Waldo Emerson. It was Emerson’s woodlot, purchased only the summer before Henry moved there. He had invited Henry to build a house and write, rent-free, in exchange for clearing the brush and replanting trees.

Additionally, Concord Woods was where the town’s freed slaves were allowed to live. Beans were the only crop that grew in the poor soil, and Henry managed a small bean field at the top of the hill behind his house. Henry, who was an outspoken critic of slavery, used his new location to draw attention to the plight of the African Americans who faced starvation trying to live on this land. Eventually, the African American community moved out of Concord, and have not returned to this day.

On the way back, we hiked along Walden Pond. 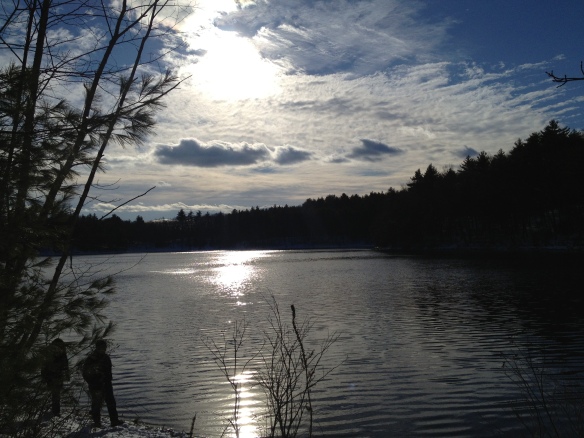 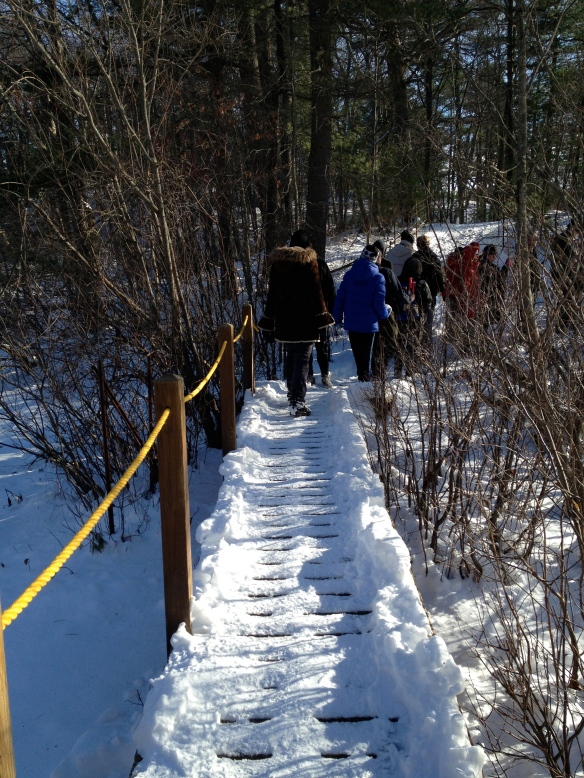 It was so beautiful.

There was a fisherman with his catch: 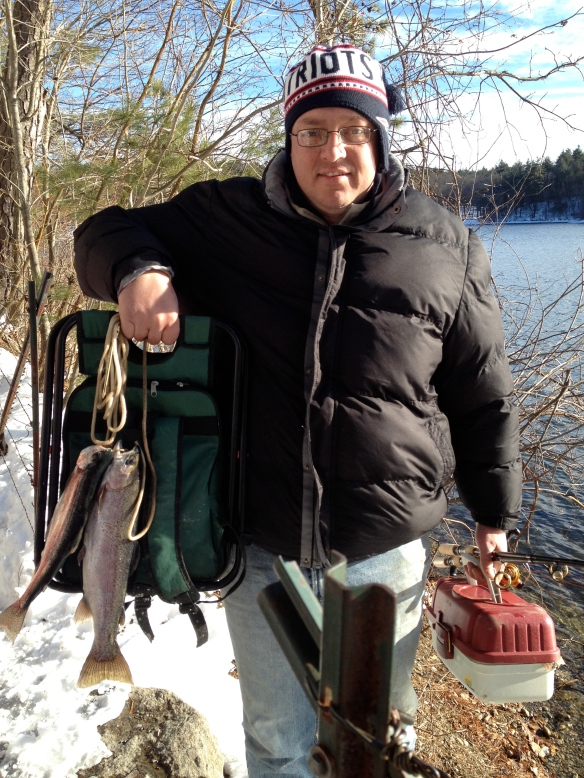 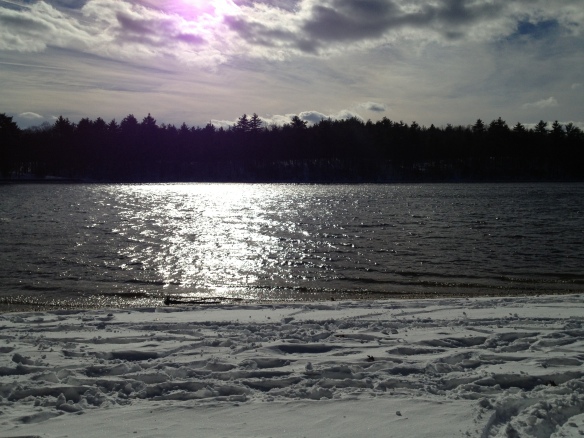 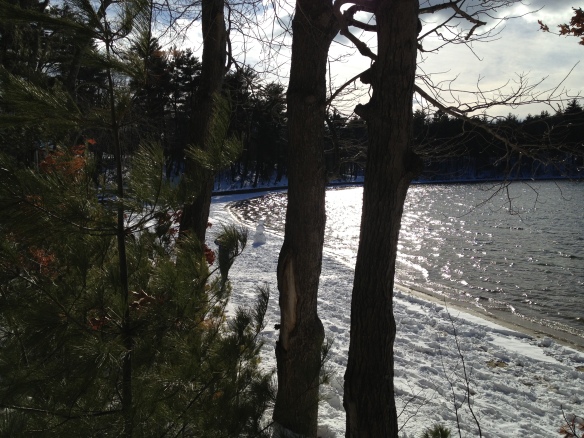 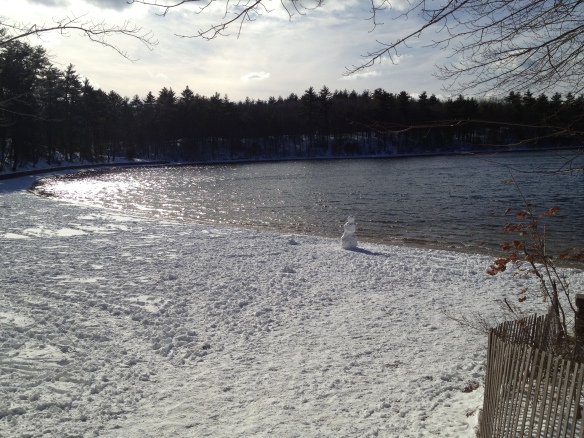