This is Ken Ludwig.

His plays have been performed in at least 30 countries, in more than 20 languages.

He has had six shows on Broadway and six in London’s West End.

The Royal Shakespeare Company and the Bristol Old Vic have commissioned plays from him.

His best-known plays and musicals include Lend Me a Tenor, Crazy For You, Moon Over Buffalo, Leading Ladies, Twentieth Century, The Adventures of Tom Sawyer, The Game’s Afoot, The Fox on the Fairway, Midsummer/Jersey, The Three Musketeers, Treasure Island, and The Beaux’ Stratagem.

And if that isn’t enough to impress you, he ordered this for lunch the day I met him:

I met Ken at our marvelous publisher’s lunch that they hosted for us on Take Our Children To Work Day at Random House. He had met with the older kids and taught them Shakespeare, while I spoke to the younger kids about my books. Then they took us to lunch and we all had a great time!

Now I’m thrilled to tell you that today is the release of Ken’s fabulous new book, HOW TO TEACH YOUR CHILDREN SHAKESPEARE!

I’VE BEEN WAITING ALL MY LIFE FOR THIS BOOK, WHAT TOOK YOU SO LONG???!!! When I heard the title, I knew right away that that I could substitute “Your Children” with “Yourself.”  How to Teach Yourself Shakespeare (When You Didn’t Pay Attention in School).

Actually, I never signed up for any Shakespeare courses for fear that they would be too hard. Usually, I have to sit through the entire first act of one of his plays, completely mystified by the language, before my brain adjusts to it for Act Two. Ironically, and with the fear and dread that comes with being a fraud, I’ve been teaching Shakespearean insults in some of my school visits (because Alvin’s dad uses them in the Alvin Ho books).

Well, I will fear and dread no more!

After reading the first chapter, I had memorized an entire line of Shakespeare :).

After four chapters, I had memorized the first four lines of a passage from A Midsummer Night’s Dream, just like that.

Not only does Ken make it easy, he makes it fun! Plus you get the back story of the play and explanations of the Elizabethan words from a world-class, living playwright! His love for and familiarity with Shakespeare pops off the page beginning with the very first lines:

“Nine words. Each word has one syllable. Nine syllables.

I fell for it hook, line and sinker (is that Shakespearean?). In fact, it’s one of those books I couldn’t help reading with a highlighter, it’s that good: 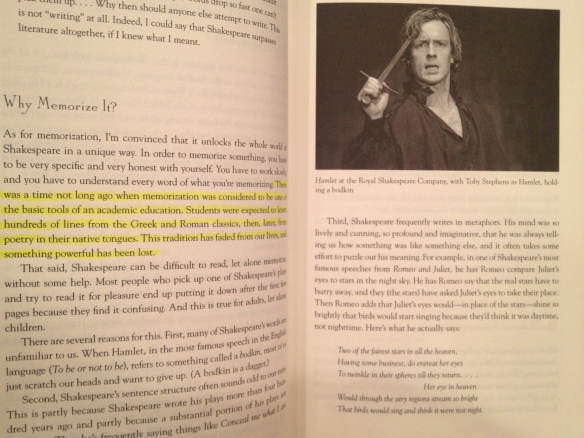 Ken explains in the book that memorization is the key to unlocking Shakespeare in a powerful way. “There was a time not long ago when memorization was considered to be one of the basic tools of an academic education,” he writes. “This tradition has faded from our lives, and something powerful has been lost.”

Why Shakespeare? Ken writes, “I have staked my life as a writer on the proposition that the arts make a difference in how we see the world and how we conduct our lives — how we view charity to our neighbors and justice to our communities — and Shakespeare, as the greatest artist in the history of our civilization, has worlds to teach us as long as we have the tools we need to understand him.”

I caught up with Ken last night, via email, and he generously and graciously granted me the following interview so that my young readers could get to know him a little better, with the hope that it’ll inspire a love of Shakespeare in all:

LL:  If a boy wanted to impress a girl, which Shakespearean passage would you recommend that he memorize?

KL: The balcony speech by Romeo in Romeo and Juliet.  It starts

But soft, what light through yonder window breaks?

It is the East, and Juliet is the sun.

LL: If a student were FOB (Flunking Out Badly), and needed to impress his/her teacher, which Shakespearean passage would work best?

KL: Lord, what fools these mortals be! (from A Midsummer Night’s Dream).

LL: If a girl wanted Shakespeare’s help in getting rid of a boy (see question #1), what passage should she use?

I see no more in you than in the ordinary of

LL: If I wanted to impress my readers with random Shakespearean passages throughout my books, would it be cheating if I don’t actually have them memorized?

KL: Not at all.  Any familiarity with Shakespeare is good.  Just read his plays and learn to love him!

LL: I got sucked right into your book, and memorized a few lines of Shakespeare, just like that! It was amazing. You made it fun too! But you just kept going, like a train without brakes! You were going to make me memorize twenty-five passages of Shakespeare before the book was over, and I just couldn’t keep up. I short-circuited something by Chapter 11. How do I get off the Shakespeare express and get on the local?

KL: Great question.  You shouldn’t try to read the book all at once.  Learn a passage and then wait a week to look at the next chapter.  I met with my son and daughter for “Shakespeare time” only on the weekends.

LL: How did you become a playwright?

KL: I knew since the time I was 6 years old I wanted to be in the theatre, and after watching plays for years and years, then acting in them, I decided that writing plays would be the most fun of all.

LL: What do you like most about being a playwright?

KL: The chance to write about what I think is important to people.  To try to pass on my sense of optimism.

KL: The lag time between finishing a play and then getting to see it on stage.  It usually takes about a year by the time the theatre receives it, decides to do it, puts it on the schedule and starts rehearsals.

LL: Where do you work? What is your writing space like?

KL: I have two offices in my home, both separated from the rest of the living space.  One has two huge armchairs and a fireplace.  The other one has a desk and all the theatre posters from my past productions on Broadway and in London.

LL: What is a typical day like for you?

KL: Wake up at 6:00, take my son to school, make coffee and get down to writing by 7:30.  I usually write all day till about 6:00.  However, if one of my plays is having its first production ever, I get involved for weeks at a time in the casting and rehearsals and then the previews.

LL: Some of my readers might be interested in becoming playwrights themselves. What is the most important thing that they can do at a young age to start their journey?

LL: What were you like as a little boy? Were there signs then that you would write for the rest of your life?

KL: I was a voracious reader.  When I learned that I loved the theatre, I read every play I could get my hands on.  Literally hundreds and hundreds of them.

LL: What did you like reading when you were a boy?

KL: First it was Winnie the Pooh and the Beatrix Potter’s Stories, then adventure books, like Treasure Island and The Adventures of Tom Sawyer.  Then from about the age of ten it was everything to do with Shakespeare.

KL: In addition to Shakespeare (which you can keep reading and studying all your life), my favorite author is Jane Austen.  I always have her books next to my bed.  I also love 18th century novels, like Tom Jones by Henry Fielding.  I love Charles Dickens.  I just reread Wuthering Heights by Emily Bronte.  I love rereading Boswell’s Life of Samuel Johnson.  And I love history books.  I’m always reading something new about Churchill and World War II.  I also like biographies of great writers.

LL: Are you working on another book?

KL: Yes!  And I’m thinking about writing a sequel to How To Teach Your Children Shakespeare.

I started taking it seriously and spent enough time sitting quietly and doing it with integrity.

change peoples’ lives and help them understand how Shakespeare makes our lives deeper and richer.

have faith in yourself.  Invest in yourself.  You can make a difference.  Just stick to what you love and do it with honesty and integrity.

eat more candy to see how much sicker it will make me.  🙂

tell all my friends about it!  And then I’m going to tell them to read every single Lenore Look book in the world!

THANK YOU VERY MUCH, Ken. Again, Congratulations on a fabulous book!!! BREAK A LEG! XXOO