VANDENBERG AFB, CA — Two weeks ago I had the privilege of attending the launch of the OCO-2 satellite, and tweeting about it on Twitter. My young readers are not on Twitter, however, so I will recap the events for them here with some never-before seen photos of this top-secret military base (and hope that I don’t get busted!).

How to Launch a Rocket

1. Arrive at the top-secret south entrance at the pre-arranged hour. 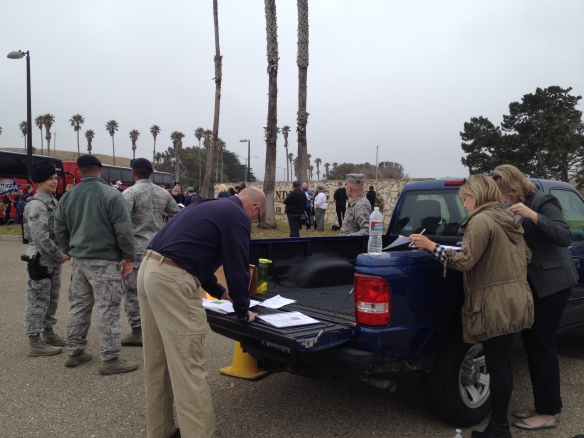 2. Pretend you can’t read English as you step past this sign: 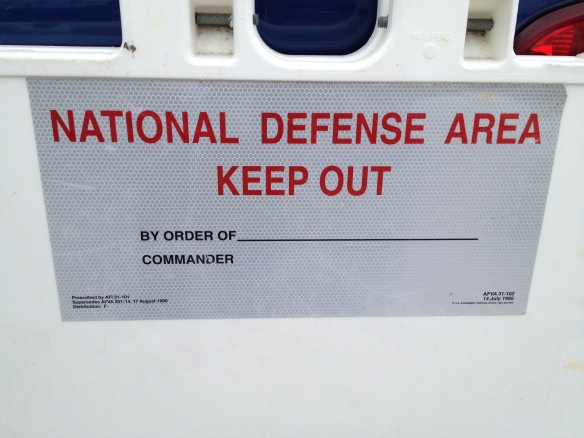 3. Present two forms of government-issued I.D. for your security clearance: 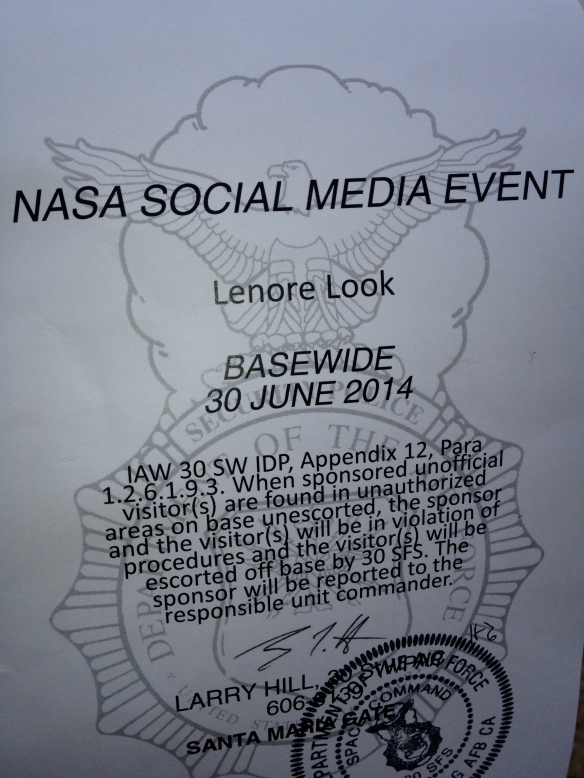 Which you must wear on your person at all times while on base. 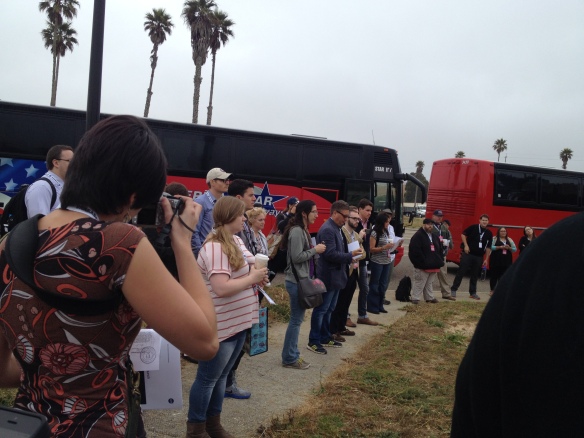 5. Step inside the hangar. 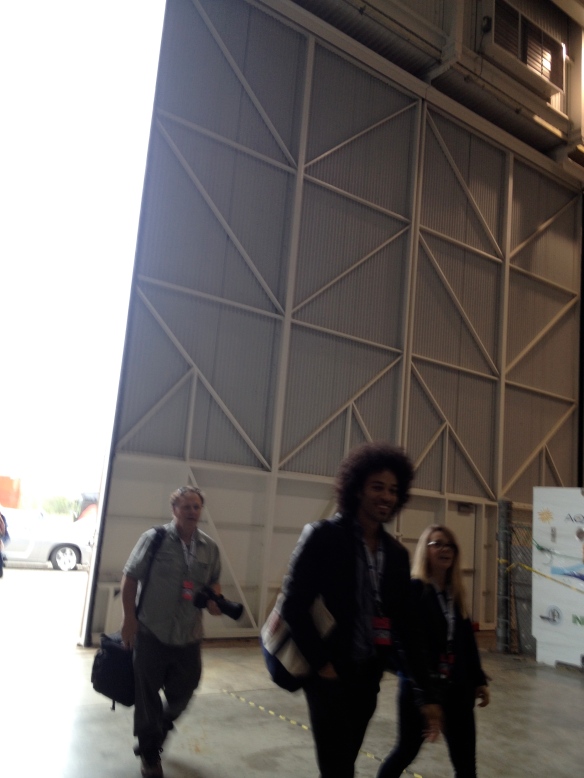 6. Listen to NASA scientists explain how to launch a rocket within a 30-second window to place the OCO-2 satellite in a precise point in an orbit with 17 other satellites. 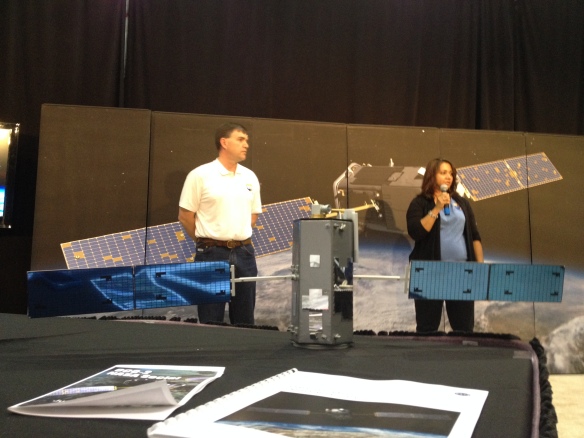 It’s all very extremely precise and complicated, so … 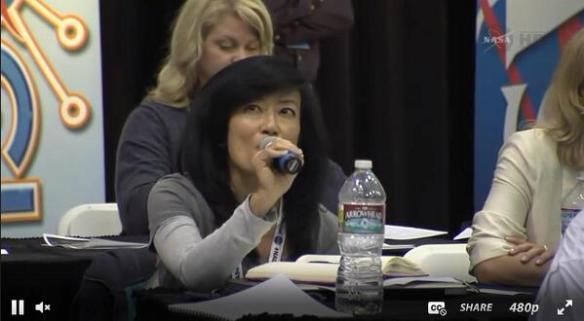 8. If one of the scientists follows you out of the building saying that you still look confused, try your best to look smart. More importantly, try to your best to understand what he’s saying or you’ll end up misinforming your readers, or omitting vital information entirely.

9. As soon as you get back on the bus, cry. Cry that not only are you not smart enough  work at NASA, but you’re not even smart enough to understand the answers to your own questions 😦 ! 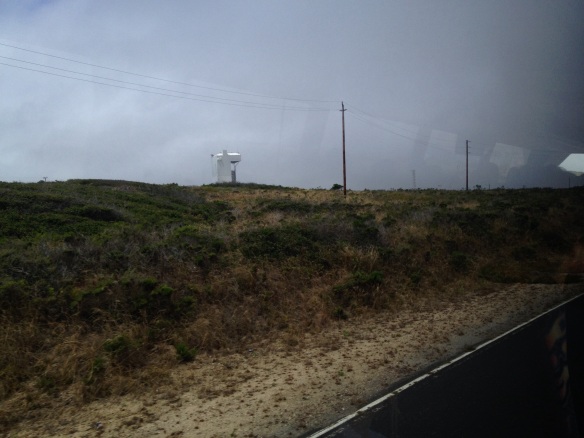 Above is one of the Space Launch Complexes (SLC, pronounced as “slic”).

Below is the Pacific Ocean, just north of Honda Point, where 11 Naval destroyers ran aground in 1923, and seven sunk. 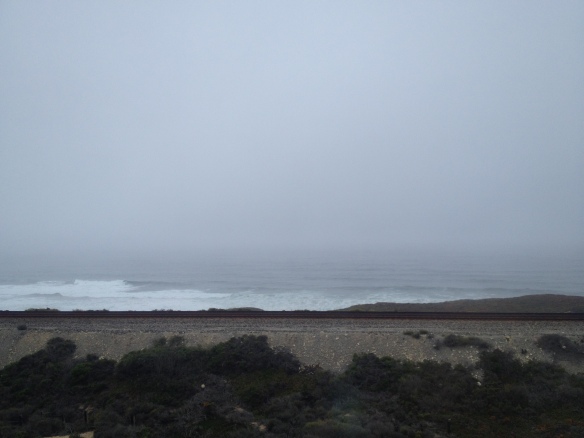 Vandenberg Air Force Base is built on 64,000 acres of farmland that had originally been a part of a larger Army base, Camp Cooke. The Russians launched Sputnik in 1957, and the following year, the U.S. responded by launching a Thor IRBM (Intermediate Range Ballistic Missile) from Vandenberg.

In 1959, the Soviet leader Nikita Khrushchev rode through Vandenberg on the train (the tracks run right through the military base) from Los Angeles to San Luis Obispo. His American hosts had wanted him to see the Atlas missiles aimed at the Soviet Union visible from the train.

Not far from Honda Point is  SLC 6, designed for the space shuttle: 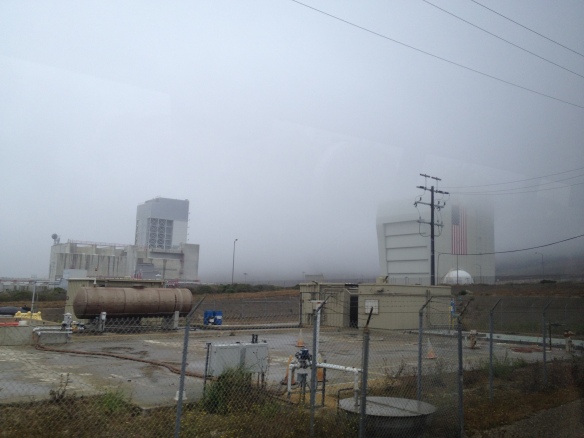 The space shuttle program was cancelled after the Challenger disaster in 1986. No shuttle ever launched from Vandenberg.

But there’s evidence that the space shuttle was here: 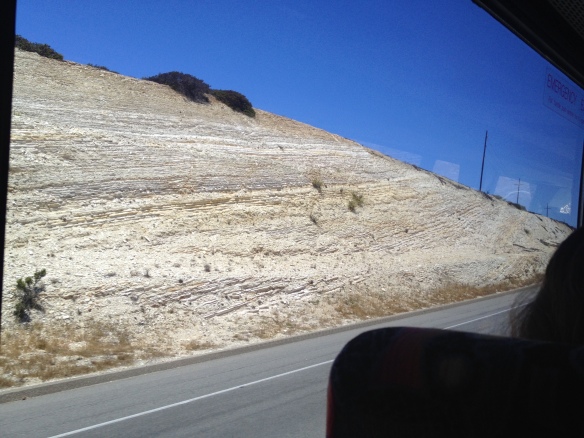 The sides of the canyon had to be cut away in real time to accommodate the space shuttle wings as it was being towed to SLC 6. Power lines also had to be elevated.

I have seen with my own eyes the space shuttle Enterprise being towed up the Hudson River on its way to the Intrepid Sea, Air and Space Museum on June 6, 2012. And lemme tell you, it was a behemoth in a kiddie pool. 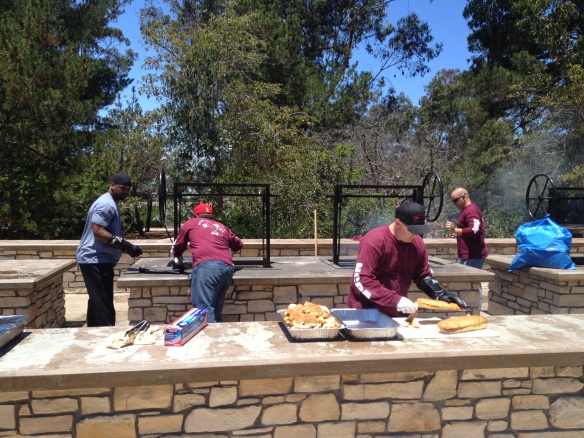 Here are the non-commissioned officers cooking a yummy Santa Maria BBQ for us, complete with fresh homemade salsa, chili and veggie burgers for those with food issues. Thank you, NCOs!!!

12. After lunch, enter a top-secret, classified area (note the barbed wire and fence): 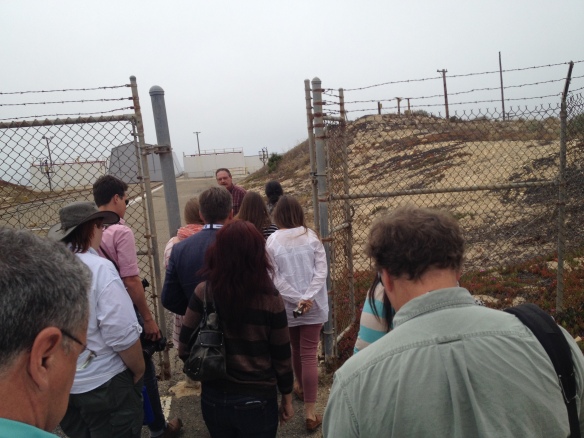 What could possibly need security like that within a secured military base?

Gasp! The world’s only Thor rocket launcher in existence today, that’s what! 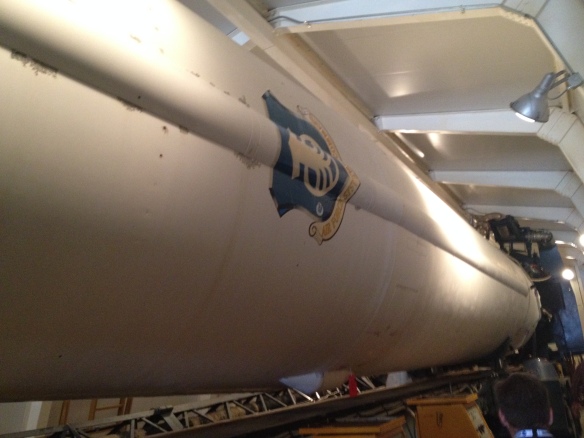 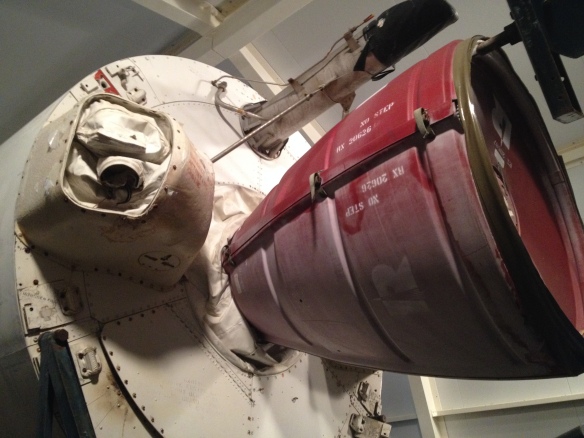 Empty, it’s a 6010-pound aluminum can. But with fuel, it’s a 110,000-pound monster. This is the “grandpa” of the Delta 2 rocket, and was used to launch medium-range ballistic missiles as well as reconnaissance and weather satellites.

Here is our Thor guide, Jay, pointing to the missile head that once contained a weather satellite: 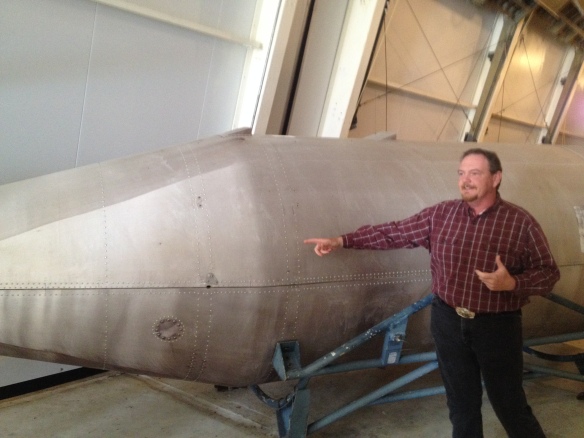 And here is one of the control panels: 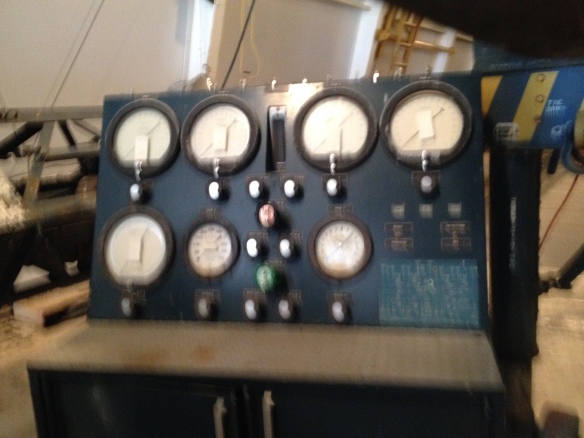 Oops! The anti-espionage sonar must have scrambled my phone and prevented me from taking a clear photo.

But I got a clear shot of the warning: 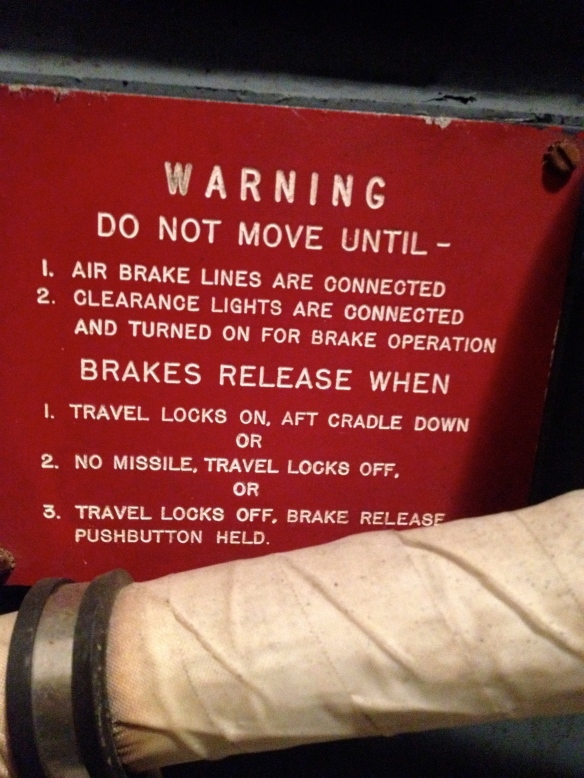 Jay explained that back in the bad old days when they launched a Thor IRBM, they simply pushed the building (it’s on wheels on a track) away from the rocket, tilted the rocket and its missile head to vertical and blasted away.

If this rocket ever goes missing, you didn’t see it here. This post will self destruct. I will no longer be blogging … unless there’s free wi-fi in the Federal Penitentiary at Lompoc. Gulp.

Did I tell you that I had to drive past the penitentiary on my way to the off-the-map south gate in the morning? The prison is a working farm on land that was formerly a part of the military base. I’m not so good at planting stuff. Especially under a hot white sun in the desert.

Hmmm. Well, I sure hope I don’t get busted for showing you all this top-secret rocket stuff.

Or for trying to twist Charles Bolden’s arm to give me a closer look at that LIVE rocket behind us: 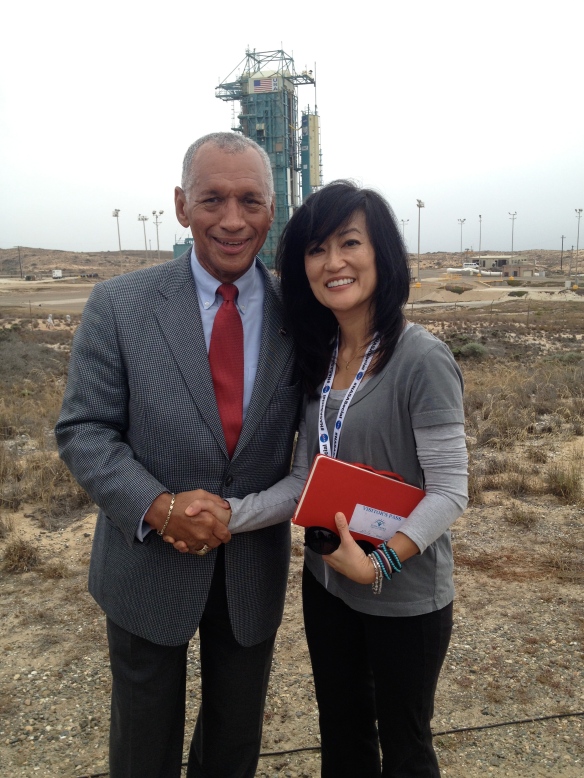 Mr. Bolden, who is the NASA Administrator, was often riding atop the rocket itself as an astronaut, so surely he wouldn’t bust an author for approaching the gate within a few hours of the 42nd liftoff from Vandenberg because how else would she launch a rocket, right?: 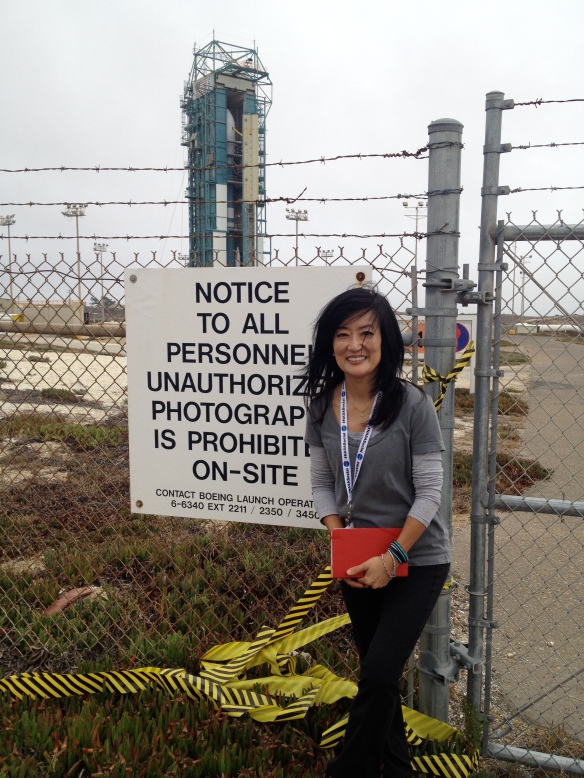 Yikes!!! Can you believe I got this close to a FUELED rocket that was about to blast off into outer space on 227,000 pounds of thrust, accelerating from zero to Mach 22 in eight minutes???!!! Yes, that’s 22 times the speed of sound, or 16,874 mph. But not only is it supersonic fast, it’s “unbelievably precise and accurate,” as Randy Pollock, the original architect of the OCO, said in the morning news conference.

As it turned out, the OCO-2 launched on its second attempt, on July 2, at precisely 2:56:44 a.m. We couldn’t see it through the coastal fog from the public viewing area more than 3 miles away, but we heard its strong rumble and felt its sonar waves shaking our bones.

The OCO-2 is circling the earth every 99 minutes. It’s on a two-year mission, but has enough fuel for 12 years. It is collecting hundreds of thousands of measurements each day of the concentration of carbon dioxide in our atmosphere. The data will be used to help us manage climate change. With one eye on the stars, and its arms turned toward us, NASA scientists say it’s watching the earth breathe.

It takes my breath away.

A space shuttle-sized THANK YOU to Stephanie L. Smith, Courtney O’Conner, Veronica McGregor, John Yembrick @NASASocial, and Larry Hill, Vandenberg AFB Chief of Community Relatons and Tour Guide Extraordinaire, for your warmest welcome and hospitality at the launch of OCO-2. And a special thank you to all the NASA scientists and engineers who were so inspiring: Ralph Basilio, Ken Junks, Randy Pollock, Pavani Peddada, Ann Marie Eldering. 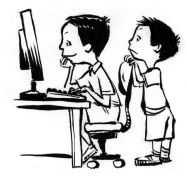