Last week I visited Stony Lane School and Memorial School in Paramus, NJ, and Pine Tree School in Monroe, NY. It was such great fun! A great big THANK YOU to the marvelous librarians Leslie Rochman, Marie Creste and Nicole Lee, who hosted me and organized my day and plugged my books at their respective schools. Author Day is a lot of work for the librarian! I appreciate all your hard work more than you know! Thank you!!!

I was on my way to more school visits and to speak at the Hong Kong International Young Readers Festival this afternoon, when I missed my flight :(. So a librarian in Hong Kong, who worked very hard to organize my day for Thursday, is now scrambling to reschedule me and to fix Authorless Day on Thursday. I’m so sorry, Tanja!!! I feel terrible :(. And my apologies to your entire school :(…….

With a quiet, unexpected evening at home, I’d like to share with you a really wonderful new book that my friend, the Canadian poet JonArno Lawson, just published two days ago! I guarantee this book will make us all feel much better:

Sidewalk Flowers is a wordless picture book that follows a little girl as she follows her distracted father through the city. She gathers flowers (weeds, really) that grow in the cracks of sidewalks and walls, while he talks on his cell phone and pays little attention to her.

Once she has a full bouquet, she starts giving them away, one flower at a time, to the people and animals that come across her path — a friendly dog, a little dead bird, a sleeping man on a bench, and her own brothers and mother. Each encounter transforms both giver and receiver, and by the end, I felt transformed by my encounter with this book.

So I asked JonArno about it, and this is what he had to say:

What inspired you to write Sidewalk Flowers?
It was based on a walk I took with my daughter, Sophie, two days after my youngest son, JoJo, was born. My wife, Amy, was at home with Ashey (my older son, who was 4 at the time) and the baby, and I was in a rush to get home. I wasn’t really paying attention to anything – I was in a hurry, I was anxious, the city looked ugly to me, and as we rushed up Bathurst Street (in Toronto) on foot, while I looked about for a cab, Sophie was gathering little flowers out of the cement cracks in the sidewalk and the retaining walls along the hill. When I finally noticed what she was doing, she already had a small bouquet, and when we got home, she decorated Amy, Ashey (who was playing with snails in the garden), and JoJo (who was asleep in his stroller).
What is Sophie like? Or what was she like at that age?
Sophie is a very generous, loving and determined person. She was then too. She just turned 14!
How did she respond to the book?
She liked the idea of it as a story, and she liked the little mock-up I made of it originally, when I was shopping it around to publishers. All three kids were very encouraging when it got rejected multiple times – they all felt it had a good chance of getting picked up eventually. They were delighted when it finally got accepted, and they were in awe of what Sydney (Smith) did with it – so was (and am) I!  Sydney’s work took it to a whole other level.
Did you involve her in the writing process?
No, though really you could say she wrote the main melody of the story simply by living it! I gave it a definite shape, with important editorial contributions from Sheila Barry (at Groundwood Books). And then Sydney gave it its visual pacing and conjured and incorporated amazing unexpected details into it. Any way you look at it, it was a highly collaborative work. Amy, Ashey, and JoJo being our destination are an essential part of the story as well.
How do you write a wordless book?
I could never have planned it. I’m very word-oriented. I had to see it happen, as I saw it – which was lucky – and I never even attempted a version with words. I knew it had to be quiet, like it was in life, and that words would take away from it – they couldn’t add anything. Since doing Sidewalk Flowers I had another idea for a wordless book, but interestingly, again it was something I saw happen – it didn’t come to me in words. Sydney and I will be collaborating on that as well.
A poet is already sparse with words, how was it to make the jump into wordlessness altogether?
I’ve felt a bit vulnerable, on the publishing side of things (but not during the submission/rejection part of it). When it came out, I realized that my contribution was invisible – it was completely immersed in Sydney’s pictures.  I hadn’t realized how attached my ego was to the story until it came out – and then I felt a bit like Gollum, wanting to return with “my precious” story to a dark lake under a mountain.
Both you and the illustrator live in Toronto. Are those actual places in Toronto depicted in the book?
Sydney captured a lot of the actual walk in the first half of the book (he was good enough to walk it – he was brand new to the city at the time, having moved here from Halifax just before). So between Dupont and Bathurst Street, and Vaughan Rd. and St. Clair – Sydney’s captured a lot of the actual walk (though he’s expertly blended the best parts of different sections of the street).  There are some glimpses of Chinatown, where Sydney’s studio is as well. He described the book as his “love letter to Toronto” – and you can see that. So it isn’t strictly the walk – he’s using different bits of Toronto, especially in the second half of the book.
The scene of the dead bird with flowers on his chest made me cry. I thought of my father who had died recently, covered with flowers as he was lowered into the earth. It’s a very emotional book. Is there a scene that touches you particularly? 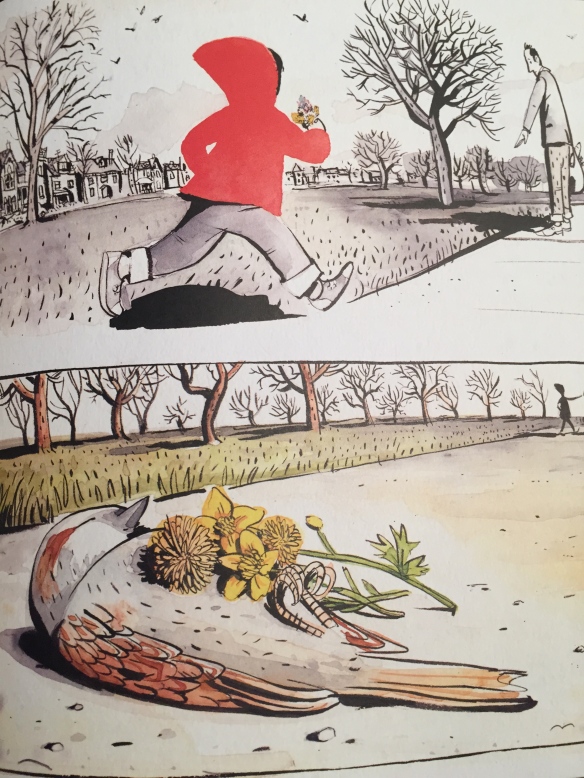 For me it’s the embankment scene, where she’s scrambled up next to the bus stop. This is the scene I remember best from the actual walk – Sophie went up that little embankment singing, taking her time.

In real life, that embankment is on the other side of the street, and a bit further south. Sydney’s put it right next to a small strip of stores closer to St. Clair, and in one of those stores I do all of my photocopying! When I brought the book in to show the owners they were delighted!
Will you do more wordless books?
For sure one more – I’m working on it right now. After that, I’m not sure.
Thank you, JonArno, for the wonderful gift of this book! And congratulations on starred reviews from Kirkus, Publisher’s Weekly, School Library Journal, and counting!
Now doesn’t that make you want to RUN out and get it???!!! It’s absolutely fabulous!!! You’ll love it!!!